A year of opera, trad, literature, film and much more besides, across the country 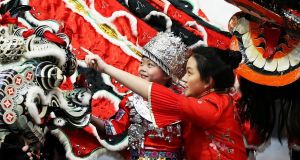 The biggest show around, all year long, has to be Galway 2020. Galway becomes European Capital of Culture on February 1st, starting a year of over 1,900 events across 154 projects, with local, national, European and international artists and cultural organisations , in the villages, towns, islands and city.

Starting on St Bridget’s Day, February 1st, in Clifden, fiery celebrations across the county over seven nights move closer to the city, with a community cast creating events in Clifden, Spiddal, Tuam, Ballinasloe, Portumna and Athenry reaching the streets and squares of Galway city on February 8th for an open-air finale.

New line-up additions include To the Moon, a dream-like immersive lunar exploration by Laurie Anderson and Hsin-Chien Huang; Tobias Hutzler’s Typographies of Light, using light to create a contemplative installation on a Connemara hillside; and Imagining Ireland concert visiting the city. galway2020.ie

New Music Dublin (February 27th-March 1st): Annual festival of contemporary new music with 17 Irish and 22 international premieres in over 20 events, including works from Gerald Barry, Jane O’Leary, Una Monaghan and Fergus Johnston, and performances from Lawrence Power, Bang On a Can, Andreas Borregaard, Crash Ensemble, the Ligeti Quartet and the Totally Made Up Orchestra. newmusicdublin.ie; nch.ie

One City, One Book (April): The Dublin City Council Libraries’ month-long book choice connected with the capital is Tatty by Christine Dwyer Hickey, a Dublin family and the destruction of alcoholism, seen through a child’s eyes. dublinonecityonebook.ie

Bealtaine (May): Month-long nationwide festival celebrating the arts and creativity as we age, including Ceol le Chéile Donegal Choir of Ages as flagship choir for Dawn and Dusk Chorus events, plus a tour of Pom Boyd’s Windy Lady show. bealtaine.ie

It Takes A Village (May 8th-10th): A festival under cover, with the option to sleep in a bed in holiday village take-over at Trabolgan, East Cork. ittakesavillage.fm

Kilkenny Cat Laughs (May 28th-June 1st): Still laughing in Kilkenny after more than a quarter of a century, now programmed by Collapsing Horse director/producer Dan Colley and Matt Smyth. thecatlaughs.com

Blackwater Valley Opera Festival (May 26th-June 1st): Opera doublebill of Gianni Schicchi (Puccini) and I Pagliacci (Leoncavallo) at Lismore Castle, plus recitals in the great houses and churches of Cork’s Blackwater Valley. blackwatervalleyoperafestival.com

Galway International Arts Festival (July 13th-26th): The 43rd festival comes slap in the middle of Galway 2020, for which GIAF’s Paul Fahy commissioned Irish artist John Gerrard to create two artworks responding to climate crisis on LED walls in a mirror pavilion. Straw Work is at the city’s Claddagh Quay from April, and Leaf Work on Connemara’s 4,000-year-old Derrimlagh Bog in autumn. Early highlights are the hotly anticipated musical theatre adaptation of Patrick McCabe’s Breakfast on Pluto (by Bob Kelly, music by Duke Special, directed and co-created by Des Kennedy), and top acts include the Pixies, The Flaming Lips, Sinéad O’Connor, Jon Hopkins, The Academic and The Stunning. giaf.ie

Fleadh Ceoil na hÉireann (August 2nd-9th): This year the Fleadh moves to Mullingar, where it started in 1951, for The Homecoming, epic céilí and competition. fleadhcheoil.ie

National Heritage Week (August 15th-23rd): Communities and cultural institutions, academics and enthusiasts open the door, and the gate, to our heritage. heritageweek.ie

Dublin Fringe (September 5th-20th): The 26th year of the curated, multi-disciplinary festival of the coolest, most cutting edge theatre and performance around. fringefest.com

Dublin Theatre Festival (September 24th-October 11th): Line-up to come, but we look forward to the Abbey’s epic new play cycle by Marina Carr, The Boy, channelling the pain and beauty of Greek myth into a new form. dublintheatrefestival.com

Baboró (October 12th-18th): For Galway 2020, the children’s arts festival premieres The Veiled Ones, a Junk Ensemble dance about the relationship between grandparents and grandchildren; The Streets Are Ours, a year-long promenade performance project mixing parkour, dance and circus; For the Love of Sweat, devising a new sport. baboro.ie