The All-Ireland at Electric Picnic: ‘Where’s the telly, anyway?’ 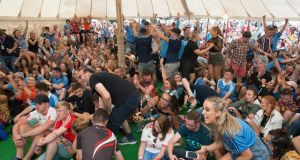 The pranksters from Ireland: A Survivor’s Guide may not have quite appreciated what they’d signed up for when they agreed to go on ahead of the screening of the All-Ireland football final, between Dublin and Tyrone, at the Irish-language Puball Gaeilge stage at Electric Picnic on Sunday.

The tent is a churning mass of blue jerseys long before the end of their performance, and the high-concept wackiness is received politely rather than rapturously.

“Just bleedin’ get on with it,” one woman, at a picnic table, says.

“Someone should just tell them to stop, right now – just stop,” her friend adds.

“Where’s the telly, anyway?” another asks.

“Up Mayo,” a guy down the back yells.

This is novel territory for the Puball team. For the past several Electric Picnics the All-Ireland hurling final has been on in the Newstalk tent, also in the Mindfield spoken-word area. But there is no Newstalk tent in 2018, and no hurling final, either. Instead it’s the Dubs who have descended in considerable numbers – and perhaps not to enjoy a Pythonesque survey of the travails of life in medieval Ireland. (The Survivor’s Guide crew are still up there, now mock-fighting with lightsabres).

The screen is actually biggish rather than gargantuan. And, with throw-in fast approaching, it’s hard to get around the fact that it has not yet been switched on

The provenance of the promised screen on which the match is to be shown is a matter of considerable discussion. The presumption among many Dublin fans – hey, look at that one Tyrone supporter bravely among them – is that the All-Ireland will be on a jumbo telly, like the one at their local pub.

The screen is actually biggish rather than gargantuan. And, with throw-in fast approaching, it’s hard to get around the fact that it has not yet been switched on. (The Survivor’s Guide people are now doing something complicated with a stuffed-toy snake.)

“Where’s the bleedin’ game?” the woman next to me says, and not for the first time.

But lo: something is happening. Up on the podium an enthusiastic fellow is cajoling the masses, not entirely successfully, into singing Come on Ye Boys in Blue as Gaeilge. He then speaks in a comedy Tyrone lilt and invites us to insult the referee in Irish.

Many of us are experiencing early-onset twitchiness.

“Cross your fingers,” the MC says, and he apparently means it. Behind him a chap who looks like he knows his way around a circuit board fiddles with a remote control and – hello! – has just switched on Oireachtas TV. There is a sigh and a grumble. The telly works, but there’s probably a better time and place for edited highlights from what’s hot and what’s not in the Seanad this week.

And then, finally, we flick to the game. Which hasn’t started yet. In Stradbally, Dublin fans are shouting and clapping, and all those who had been resigned to watching on their phones quietly put their screens away.

And then it rains. And Dublin win.

Expecting a decent 70 minutes of football, we have instead received a crash course in the futility of existence – just like the one handed out to Tyrone’s footballers, if you stop to think about it. Which we’d frankly rather not.