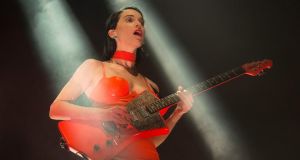 Electric Arena
The final curtain beckons at Electric Picnic 2018, but there’s still time for an impressively out-there performance from Annie Clark, aka the one-woman avant-pop uprising St Vincent. Clark received something of a critical pummelling for the high-concept, high-pretension tour that passed through the Olympia Theatre in Dublin last year. The gripe was that, in playing alone and presenting her repertoire chronologically, she was sucking all of the fun out of her music. Whether or not the criticism stung, she has given her set a robo-pop makeover: her Electric Arena slot features a live-wire bassist and guitarist-and-drummer wearing burlap masks.

The emphasis is on is Masseduction, the frosty freak-pop record inspired, it is rumoured, by her split from the model and actor Cara Delevingne. The framing, however, is pure dystopia, banks of flashing lights casting the musicians in an icy glare. Imperious in orange PVC – well, what else? – Clark manipulates a selection of primary-colour guitars with demonic zest as weird videos unspool in the background. In one she dons strap-on breasts and regards a diamond through a magnifying glass. With luck this is a metaphor for something rather than an insight into how she spends her weekends.

The music is, thankfully, more straightforward. Clark wears a chilly snarl zipping through Los Ageless and Digital Witness, and throws sad mannequin poses on Rattlesnake, a cosmic chugger that recalls a real-life incident in which she larked in the nude in a discreet corner of her native Texas. There isn’t much banter, although we get a surprise mic drop when she knocks her microphone out of its stand. During her high-NRG ballad New York, meanwhile, she starts with an improvised line about St Stephen’s Green (presumably lacking any Laois landmarks to namecheck).

Sunday night at a festival can be bitter-sweet, the audience alternately disappointed the good times are ending and looking forward to sleeping under a roof again. St Vincent captures the moment perfectly in a turn that swings between euphoria and melancholy, leaving us with a departing Picnic memory to treasure. Ed Power

Main Stage
It’s almost too perfect that the skies above Stradbally open as Shirley Manson sings the opening lines of Only Happy When It Rains. Garbage haven’t played Ireland since 1998, the year they released their second album, Version 2.0. (It was a really clever title in the 1990s, young people.) Manson, Butch Vig and their bandmates have had their ups and downs since then, including a decade-plus break-up. Clearly eager to make up for lost time, they have packed some of their best-loved hits, and they duly blow the cobwebs off an Electric Picnic enjoying a Sunday-afternoon lull. As a showcase for Manson’s complicated stage presence – dressed in a bright-red bin liner, she’s a force of nature with a streak of introversion – Only Happy When It Rains is compellingly conflicted. Grunge guitars and pop vim meanwhile illuminate Vow; the still anthemic Stupid Girl showcases Vig’s extraordinary talents as an arranger. (The drums are what make the song, as they did on his production work for Nirvana’s Nevermind and Smashing Pumpkin’s Siamese Dream.) Manson apologises for a slightly tardy start caused by technical problems. She also offers her belated congratulations for the Repeal the Eighth vote – “Thank you, Ireland, for speaking out for women.” There are some inevitable new songs, including the gale-force comeback single Empty. As the rain corkscrews down, the lesson is that they don’t make grunge-pop crossover like they used to. For 45 glorious minutes Garbage remind us what we’ve been missing. Ed Power

Electric Arena
Too many pop stars document generic emotions for maximum empathy, but the British singer-songwriter Jessie Ware goes a few steps beyond this. Across her three albums – Devotion, from 2012, Tough Love, from 2014, and Glasshouse, from last year – she has detailed aspects of her personal life via soul-pop diary entries. Their subtleties might go unnoticed on the final afternoon of a tiring and humid three-day festival – many in the audience prefer to sit and chat rather than stand and respond – but there’s no denying the strength of songs such as Your Domino, Champagne Kisses, Alone and You & I (Forever). The latter pair, in particular, rouse the crowd from their festival fug and generate the kind of response you might expect in a more compact venue. All this said, however, there is a feeling of mid-afternoon filler about the gig. Ware’s voice occasionally hits a bum note – she admits early on that she has a cold and “a croak” – which instantly lowers expectations. She also forgets some of the words to Slow Me Down, on record a lacerating tune but here feeling flat. A bit like the gig itself. Tony Clayton-Lea

Body & Soul
“The revolution will not be televised, baby. It will be live.” Gil Scott-Heron’s words intuitively prefaced the appearance of Fontaines DC, but we reckon it was the song that played directly before they smashed into their set that really determined the tone. Van Morrison’s TB Sheets is one of those angular, screeching tunes that burn off energy via surly anxiety and rational displeasure. One could argue that the Dublin band are founded on similar principles. The past year has been good for them in terms of recognition, not via radio play (perish the thought) but through live performances. Post-punk would be a handy enough reference point for the music, but there is more here than the ghosts of Joy Division, The Fall and other UK groups of similar stripes. One of the main things that set them apart is their innate identity, a potent Dublin state of mind that very few contemporary Irish bands have, or indeed care to deploy. Songs as forceful as Chequeless Reckless, Boys in the Better Land, Liberty Belle, Winter in the Sun, and Hurricane Laughter shoulder their inner dynamic lightly. The overall results are brilliant, bracing and a perfect ending of sorts for a weekend of Picnicking. Tony Clayton-Lea