Not at Electric Picnic? Massive Attack bring day two to a breathtaking close 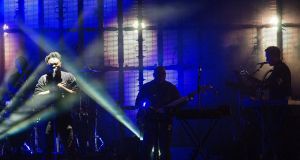 Main Stage
Massive Attack treated Picnickers to a preview of their headline performance when they interrupted breakfast with a rumbling, croissant-troubling soundcheck on Saturday morning. Deep into the wee hours of Sunday morning, they’re back for a second serving of urban angst and songs that would prefer you danced in slow motion. And, as per their billing as electropop’s moody miracle workers, it is a breathtaking close to day two of Electric Picnic. As stage lights flash and video screens beam ripped-from-the-front-pages references to Leo Varadkar and the new Rose of Tralee, Robert “3D” Del Naja and Grant “Daddy G” Marshall stand in the gloom. They are here to deliver a brooding updating of their gothic trip hop – one freighted with political commentary. (They are not, one gathers, Donald Trump fans.) Decades since they crawled out of the Bristol DJ and graffiti scene, theirs is still an extraordinary conceit, a 4am anxiety attack reconstituted as arena-ready dance music. As per their morning sneak listen, the set contains its share of oldies – as well it might, considering Massive Attack haven’t released an LP since 2010. One obvious gesture they resist is celebrating the 20th anniversary of Mezzanine, their finest album (cue controversial-opinion klaxon) and arguably the last time they truly commanded the pop-culture spotlight. They acknowledge the record with a claustrophobia-soaked Risingson. But from there it’s off to pastures unexpected. They invite their brothers in arms Young Fathers on for a cameo, showcasing their dark, urgent take on hip hop. It’s a plucky gesture, as parachuting another band into your festival-headline set risks alienating the presumably significant chunk of your audience that has come for the hits. Yet just as you fear Massive Attack have lost interest in being Massive Attack, they bow to convention with Safe from Harm and Unfinished Sympathy (both with vocals from Deborah Miller) whisking us back to the early 1990s and the trip-hop mother lode. It has been a meandering journey, but in the end Massive Attack get us to where we want to be. Ed Power

Main Stage
It’s one of the most poptastic Electric Picnics ever, with Kendrick Lamar and Chvrches owning Friday night and Sigrid providing one of Saturday’s big Instagram moments when an adoring crowd moved her to tears. (Either that or she remembered she’d left her phone charger in the car park.) So the glittery gauntlet has been laid down to Dua Lipa, the Kosovo-British singer who has set the charts aflutter with stormers such Blow Your Mind (Mwah). (“Mwah”, coincidentally, is the sound some of us were making exiting the Portaloos earlier.) She seizes the moment with a turn that confirms both her star wattage and that pop at the Picnic is absolutely a good idea. Preening like a pro, Lipa belts the song out as though it were a call to arms. And, with the sunshine a fading memory, she raises the temperature with One Kiss, a stomper showcasing her Adele-goes-to-Ibiza vocals. She also gets away with wearing a bra and open wavy shirt on a September night in Laois, making it feel like a fashion statement rather than an attempt to catch pneumonia. The song everyone is waiting for is New Rules, a break-up banger for the ages. Supercharged and high-kicking, it’s a sizzling conclusion to what may prove one of the weekend’s more scorching performances. Ed Power

Main Stage
Waking up to the news that Donald Trump is coming to Ireland, it can be hard to remember there’s good in the world. That’s why we need people like Mavis Staples. Chicago blues singer, gospel singer, civil-rights activist and all-round music legend, Staples is heading for 80, but you wouldn’t know it to see her on stage. “I’ve got people who love me,” she sings in a deep, mellow voice dripping with life and experience. Listening is like being washed over by whiskey, or hot chocolate, depending on your fancy. Covering Talking Heads’ Slippery People three songs in, she and the band find their groove, and we get ours on, too. The music gets deep into your bones as she totally owns Respect Yourself, The Staple Singers’ 1971 classic. She promises us blues later on, but now she’s offering “joy, happiness and positive vibrations”. She goes on to sing of a divided country, and opening the shades to let the light right in. If music could do it, we might yet be okay. “What took you so long?” she asks the crowd. “We’ve been around an awful long time.” She’s right: she was there on the Selma marches. We’re watching music royalty. In one of the Picnic’s worst-kept secrets, she’s joined on stage for a “surprise” session with Hozier, to sing The Band’s The Weight, and together they pull into Nazareth. Staples’s voice has been sampled time and again. Hearing the real thing is a privilege. Gemma Tipton

Electric Arena
A sparse crowd initially greets this London-based band, but no sooner has the first song finished than the sizeable tent fills almost to capacity. Much admired, then, in this neck of the woods – due, no doubt, to the success of the group’s Mercury Prize-nominated second album, Visions of a Life – Wolf Alice’s music has altered over the past five years. From fey indie-folk to ferocious indie-pop and rock might be viewed as a jump too far by some, but there is conviction in the leap from one form to the other. The linchpin that holds it all together is the band’s lead singer, Ellie Rowsell, who, with or without a guitar around her neck, delivers the kind of imperious and gutsy performance that comes into its own on hard-nut songs such as Don’t Delete the Kisses, Yuk Foo, Sadboy and Space & Time. Sticking to convention might not appeal to those who forever seek enlightenment in the wilfully odd, but there is nothing out of place with Wolf Alice’s music. Any band with such a firm grip on the kind of rock’n’roll dynamics that easily capture the imagination isn’t to be dismissed or denied due credit. Tony Clayton-Lea

SIGRID: ALL MUSIC, NO EGO

Electric Arena
Less than two hours before taking total control of the Electric Arena stage, Sigrid played a surprise gig at the Other Voices Room. You couldn’t get into it, let alone have space to move if you did. To play two such different venues such a short time apart, and each with such success, tells you something about a performer. Whatever ingenue status Sigrid had last December, when she played as part of the Other Voices festival in Dingle, the 21-year-old Norwegian – winner of the BBC’s Sound of 2018 award – is now an artist fully equipped to deal with whatever stages might throw at her. She is probably the most simply dressed woman to perform all weekend – in nothing more than a T-shirt and jeans, like her band – and her music is similarly unadorned. Yet for all its uncomplicated nature that music is immensely special: its built-in durability is impossible to ignore. How wonderful it is to see a pop singer who is all about the emotional context of the music and nothing about the ego. Tony Clayton-Lea

WHENYOUNG: A GREAT PEDIGREE, RIPE TO MAKE THEIR OWN

Other Voices
The Other Voices stage reminds me of the old McGonagles on South Anne Street in Dublin. It’s got that potentially depraved church-hall vibe, which perfectly suits the London-based Limerick band Whenyoung. Proving that the bass player is the coolest one in the band, Aoife Power works her guitar, a red jumpsuit, and her energetic vocal range with relish. Two songs in, Heaven on Earth is foot-tapping, and Niall Burns makes his guitar sing along. Is it the Limerick connection that makes me think of Dolores O’Riordan? Or is it a lineage of women vocalists with guts and power? I’m also getting The Cardigans, and Wendy James. Whenyoung have a pedigree, but the problem is I’m distractingly reminded of too many other bands. Halfway through, Power breaks into The Cranberries’ Dreams, and the crowd erupts. It’s high energy, punctuated with Andrew Flood’s insistent drumming, and I realise I’m not wrong about the similarity with O’Riordan. Things meander a little after that, before picking up again to conclude the short set with a flourish. I can’t help thinking they should have finished with Dreams. And at the same time I’m wishing they did more to make a sound that’s all their own. The ingredients are there. Then it wouldn’t be so much a homage as something handed on. Gemma Tipton