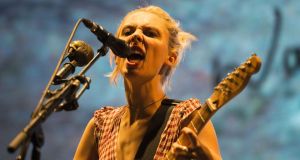 Wolf Alice: Ellie Rowsell, the band’s lead singer, is the linchpin that holds it all together. Photograph: Dave Meehan

Electric Arena
A sparse crowd initially greets this London-based band, but no sooner has the first song finished than the sizeable tent fills almost to capacity. Much admired, then, in this neck of the woods – due, no doubt, to the success of the group’s Mercury Prize-nominated second album, Visions of a Life – Wolf Alice’s music has altered over the past five years. From fey indie-folk to ferocious indie-pop and rock might be viewed as a jump too far by some, but there is conviction in the leap from one form to the other. The linchpin that holds it all together is the band’s lead singer, Ellie Rowsell, who, with or without a guitar around her neck, delivers the kind of imperious and gutsy performance that comes into its own on hard-nut songs such as Don’t Delete the Kisses, Yuk Foo, Sadboy and Space & Time. Sticking to convention might not appeal to those who forever seek enlightenment in the wilfully odd, but there is nothing out of place with Wolf Alice’s music. Any band with such a firm grip on the kind of rock’n’roll dynamics that easily capture the imagination isn’t to be dismissed or denied due credit.