For starters, get to the Main Stage at 2.30pm for Jamaican reggae legends Inner Circle 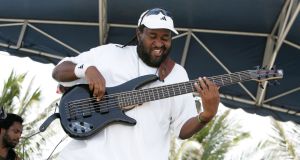 Main Stage, 2.30pm
Legacy artists tend to do very well at festivals. Take Chic: It was Electric Picnic that tempted the band to make their Irish debut back in 2009, sparking this nation’s 21st century love affair that continues to burn. This year’s most tempting hit of nostalgia comes in the form of Jamaican legends Inner Circle, aka The Bad Boys of Reggae. There are young bands playing EP this year who would sell body parts to write two songs as good as Bad Boys – which you definitely know from the movie of the same name or that TV show Cops – and that ultra-catchy, arms-in-the-air classic Sweat (A La La La La Long). Inner Circle also tend to throw reggae classics like Three Little Birds into their sets.

Cosby Tent, 9.30pm
They may be so far down the bill that you’re at risk of forgetting that they’re playing at all – but whatever you do, don’t miss Field Music. Led by the Brewis brothers, Peter and David, the Sunderland band have consistently provided ever-evolving output in the form of several remarkable albums since 2005. We’re not joking when we say that they’re one of the most criminally underrated bands on the planet, and their sense of melody and songcraft is unrivalled by most; heck, even Prince once unexpectedly bigged them up on Twitter, which tells you all you need to know. Their recently-released seventh album Open Here is another fine display of a band still in strident form – and they’re fantastic live, too. If you like your indie/art-rock with funk-driven twists, glorious harmonies and an irresistible pop sensibility as heard on songs like Them That Do Nothing and The Noisy Days Are Over, you know what to do.

Electric Arena, 9.10pm
Look, you don’t need us to tell you what a talent St. Vincent is. No doubt you’re already aware of Annie Clark’s glittering CV to date, from her remarkable solo work to her collaboration with David Byrne (including an unforgettable performance of their album Love This Giant at Electric Picnic in 2013) to her various offbeat collaborations over the past decade or so. Just don’t make the mistake of thinking “I’ve seen her before, so I won’t bother this time” at this year’s festival. Every St. Vincent gig is a different experience, and with a stellar fifth album Masseducation under her belt – her self-described most personal album to date – you’re in for a exciting set with a few hits in the mix, if recent setlists are anything to go by. If nothing else, she’s worth seeing just to witness her awe-inspiring prowess on the guitar. Yep, the girl can really play.