‘When he sings, he just speaks to you.... He’s just so real and raw and his songs reflect that’ 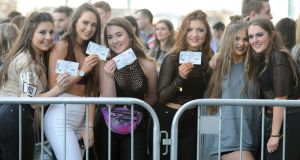 ‘When he sings, he just speaks to you’ said Ciara Koenig (16) who was one of the thousands of ecstatic fans outside Dublin’s 3Arena on Wednesday night ahead of the first of two Ed Sheeran gigs .

Ms Koenig from Clare and her friend Megan Coleman (16) from Limerick both describe themselves as “superfans” and had been queueing for several hours before gates opened.

For the girls, Sheeran’s “realness” is what resonates most with them.

“When he sings, he just speaks to you. Do you know what I mean? It’s not like all his songs are about parties and clubs and drugs and stuff we can’t relate to. He’s just so real and raw and his songs reflect that,” said Ciara.

“His lyrics really speak to me - there’s not a song on his three albums that isn’t good,” said Ciara.

“I really hope he performs Perfect tonight - it’s my favourite song off his new album but I think the crowd are going to go crazy when he plays Galway Girl tonight,” says Megan.

For brothers Cian (16) and Jack O’Donoghue (18) from Dublin, Sheeran is someone “who could just be one of the lads”.

“He’s just so honest - he’s not fake or contrived. He’s really down to earth and never forgot his roots. You could still imagine him with his cap out busking. He’s someone you could imagine being mates with,” says Cian.

“He can sing, rap, play guitar and write his own songs. So much chart music today has no meaning but his lyrics are class and every album he has done is brilliant,” says Jack.

Ahead of Wednesday’s first gig, Sheeran was spotted out and about in Galway, where he was filming the video for his number one single Galway Girl.

The city of the tribes clearly holds a place in Sheeran’s hear; he famously included home video footage of himself busking in Galway city as teenager in the video for his song Photograph.

As work quickly spread that he was in Galway, crowds of fans gathered to catch a glimpse of the musician.

Self proclaimed “hardcore fans” and bonafide Galway girls Ava Greaney and Aifric Malone (both aged 16) were among them.

“It was all over Facebook and Twitter that Ed was in Galway filming the video for Galway Girl so we had to go there and hunt him down,” said Ava.

“I went to O’Connor’s pub and O’Connell’s pub and hung outside for hours but we never got to see him.

“I waited for ages to see him but then I missed him by about ten seconds. I was devastated. He was filming near Spanish Arch and him and his band drove away just as I was about to catch a glimpse. I was running around Galway city for about three hours afterwards looking for him,” said Aifirc.

“We have standing tickets so we’re hoping we get up near the stage so Ed invites us up - that would be amazing. I would die,” said Ava.