Danú spreads magic on her twilight stroll through Galway 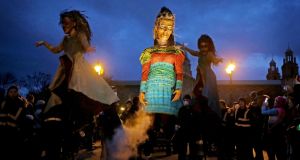 The Macnas Parade, The Shadow Lighter, celebrating the magical, mystical act of transformation, as it passes over the Salmon Weir Bridge in Galway. Photograph: Joe O’Shaughnessy/The Irish Times 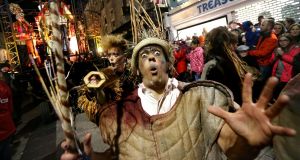 The Macnas Parade, The Shadow Lighter, celebrating the magical, mystical act of transformation, as it passes over the Salmon Weir Bridge in Galway. Photograph: Joe O’Shaughnessy/The Irish Times

Redoubtable Danú, mammy of the Tuatha de Danann, spread a little magic on her twilight stroll through Galway’s streets on Sunday evening for the annual Macnas parade.

Musicians and mummers, stilt-walkers and nymphs pursued the mother goddess, a five-metre (15ft) puppet on platforms led by her snarling ‘Wolf of Danú’.

At least 30,000 spectators had been anticipated, but there were unofficial estimates of a higher turnout for The Shadow Lighter, directed by Noeline Kavanagh.

The duality of life and the power of transformation were central themes, with many of the shapeshifting performers alternating between animal and human as fire crackled and flames licked the night sky.

Human transformation into animal form was a recurring theme in Celtic mythology, and one of Ireland’s first inhabitants, Tuan MacCairill, survived for many centuries as a stag, a boar, an eagle and finally a salmon, according to author Niall Mac Coitir.

Danú’s accomplices included her stag, the lord of the forest, a hare, representing new life and adaptability and a hooded-eye member of the crow family, while storks and frogs and otherworldly creatures contorted and hissed and howled to the crowds.

It’s now three years since Macnas and the Galway Arts Festival parted company, but the sulphurous atmosphere of the Samhain festival suits the street theatre troupe, Ms Kavanagh says. The company now has over 75 young people involved in its Youth Ensemble, while members of the Youth Ballet West and the Macnas Brass Ensemble are among its 300 performers.

A “pop-up” version of the full Galway parade will stop traffic and cause general mayhem in Dublin on Monday, October 26th during the Bram Stoker Festival, when Danú and company take three routes through the city centre from 5.30pm, with a final gathering in Wolfe Tone Square.

The pros and cons of being a writer
7

Passchendaele: A killing field of mud
9