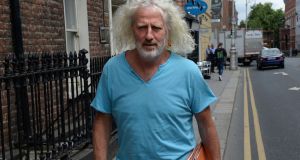 If depictions of future parliaments from 1960s sci-fi had worked out, our leaders would now enter debates in crisply starched jumpsuits with Nehru collars. If contemporaneous kids had been correct, nobody would give a hoot what anybody wore in such circumstances. Budget statements would be delivered in kaftans.

Life is more mundane. In 2017, we are still wondering whether men should be compelled to wear suits in parliament. There is a surprising subtext to the current controversy.

It is often correctly argued that the media pays far more attention to how female politicians dress than it does to their male counterparts’ clobber. Yet the photographs chosen to illustrate this newspaper’s story on a potential dress code for the Dáil were all of men.

Mick Wallace strides forth in a peacock-blue T-shirt that suggests hospital scrubs worn for too long in a brutal war zone. Richard Boyd Barrett is ready for the weeding in faded jeans and a grey anorak. Michael Healy-Rae ventures out beneath what I am probably not allowed to call that stupid bloody cap. Crucially, none is wearing a tie.

A person’s clothing says little about their seriousness of purpose. Donald Trump wears eye-wateringly expensive suits, but he has, so far, failed to be anybody other than Donald Trump.

There are, sad to say, many more men than women in the Dáil. But this question genuinely is a little easier to frame for those male deputies. For at least 70 years, the standard uniform for such politicians has been necktie and lounge suit. Anything else counts as deviation. Following complaints, an Oireachtas committee on Wednesday debated whether a dress code should be introduced.

Speaking on The Pat Kenny Show, Boyd Barrett argued that the “political establishment” was concerned that he and his colleagues had worn “symbols supporting Tesco workers, or symbols supporting the campaign for Repeal the Eighth”. Sure enough, last September, he and colleagues were pictured wearing “Repeal” shirts within the chamber.

Put in those terms, the potential move does sound like a curb on democratic expression. But few voters, when consulted on this issue, would think first of such protests. The primary issue is whether traditional, semiformal attire should be imposed on parliamentarians.

Those opposed to a code will argue that they ask only for freedom. Boyd Barrett is not suggesting that less casual TDs be prohibited from wearing Brooks Brothers’ finest. Meanwhile, Healy-Rae can continue his family’s tradition of dressing for a coursing meet, and Wallace can pull on the vestments of a resting Grateful Dead fanatic.

When Boyd Barrett and colleagues donned “Repeal” shirts, they looked more sartorially homogenous than any of those around them

There is no real hypocrisy at work here, but the act of dressing down has, in itself, become a political statement for parliamentarians.

The late Tony Gregory’s habit of not wearing a tie set him aside from most other contemporary TDs. Quizzed on the matter, he once argued that many of his Dublin Central constituents could not afford ties. In that Newstalk interview last week, Boyd Barrett said that he wanted to stand up for those who “don’t feel the need to wear a particular type of uniform”.

The problem here is that pointedly casual clothing has now become an unofficial uniform for independently minded TDs. When Boyd Barrett and colleagues donned “Repeal” shirts, they looked more sartorially homogenous than any of those around them.

The clothing was, of course, not imposed upon the dissenting deputies. That is a key distinction. But they are showing allegiance through the stuff they wrap around their bodies.

Formal informality has been around for a long time. For TV appearances, Christopher Hitchens often adopted the official costume of the rebellious working journalist: top button undone, loosened tie knot lowered an inch or two beneath the Adam’s apple. And no Etonian housemaster is quite so particular about dress etiquette as was the first-generation hippie. Jeans should never appear new. Hair should never be worn shorter than shoulder-length.

For 40 years, “suit” has, among such people and their descendents, served as a loaded insult for the class of awful, seal-bashing square who habitually wears such a garment. “Oh, man. The suits have taken over Glastonbury.” That sort of thing.

The point is that everybody says something about their attitudes by the way they dress. Agreeing to conform is a political statement. Joining the formally informal cadre within any parliament constitutes a more aggressive declaration of principle.

A person’s clothing, however, says little about their seriousness of purpose. Michael Foot, leader of the UK Labour Party in the 1980s, dressed like an elderly layabout, but he had a sounder grasp of Westminster’s dynamics than all the stuffed shirts that followed him into that role. Donald Trump wears eye-wateringly expensive suits, but he has, so far, failed to be anybody other than Donald Trump.

So let our Dáil deputies wear what they wish. But don’t pretend that dressing down isn’t a loaded gesture.