Cleverly crafted farce makes us laugh till it hurts 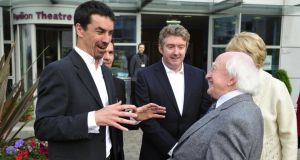 At the theatre, you hear many kinds of laughter: raucous guffaws, sly sniggers, intellectual titters of delight. But I don’t think I’ve ever heard laughter quite like that at Fishamble’s “produced reading” of Colin Murphy’s Guaranteed! at the Civic Theatre in Tallaght.

Murphy’s deft and deeply intelligent script is a superbly researched and cleverly shaped reconstruction of the events leading up to perhaps the single most fateful government decision in the history of the State: the blanket bank guarantee of September 2008.

It is not a satire and it is not played for laughs.But it gets them, nonetheless. At regular intervals, a harsh, cold cackle – bitter, rueful, balefully knowing – sweeps through the audience. Comedy arises when there is a contradiction, a slippage, a disjunction between one perception and another. And here, the slippage is between lived reality and retrospect.

This is stuff we all lived through: house prices spiralling to infinity and beyond; Bertie Ahern bestriding the globe like Colossus in yellow trousers; Brian Cowen, singing and drinking his way through his night of triumph in Offaly; Anglo Irish Bank getting award after award for its miraculous production of profits. At the time, it was just the way things were.

Except, of course, it looks utterly grotesque now. We know now, as most of us did not then, where it was all leading. So watching the whole thing now is like watching someone ambling along in the sunshine, whistling a happy tune, towards the edge of an unseen abyss. We’re programmed, at some level, to find this funny: kids will happily watch people slip on a patch of invisible ice all day.

But, in Guaranteed!, there’s an extra twist. We’re not just watching someone walk blithely into the abyss; we also are that someone. This is our story too; we’re roped to these reckless climbers on the highest slopes of bubble mountain. There’s a kind of double take; we look at the man slipping on the banana skin but we feel the shock and pain of the fall. Hence that strange, mirthless laughter.

Murphy understands it. It matters greatly that his knowledge of the theatre is as firm as his grasp of the banking crisis. There’s a brilliant juxtaposition of a crisis meeting between David Drumm of Anglo Irish Bank and the financial regulator on September 20th, with a speech by Cowen, the then taoiseach, on the same day: “Handball is synonymous with Crinkle: it’s been played here since the army barracks was built at the turn of the 19th century . . . So I’m particularly delighted to now declare this handball alley officially open.”

Murphy, the director, Conall Morrison, and the very focused actors, know lines like these don’t have to be played for laughs. The audience doesn’t need to be told that they are horribly, almost unbearably, funny. The biggest and bitterest laugh is a tribute to the way Murphy uses this idea of audience as participant. Drumm is pressing the regulator for €7 billion. The regulator asks “Is that a precise figure, David? Where did you get it from?” There’s a weird noise in the auditorium, half laugh, half howl, as everyone silently roars, He picked it out of his arse. After a perfectly timed pause, Drumm replies his team had worked hard on the figures. The wonderfully deadpan reading allows us to insert our own unspoken expletives.

Documentary play
There is, in other words, a great deal of theatrical craft in Murphy’s text. Guaranteed! was billed as a “documentary play”, which is partly true. Most of it is indeed made up of extracts from the public record, with a strict chronology governing the plot and all of the events at least consistent with what happened. But there is artistry here, too. Murphy has to imagine what went on in private meetings and does so convincingly. Just as importantly, his juxtapositions of events are perfectly poised between an appreciation of their inherent absurdity and a cool, nonjudgmental way of letting things speak for themselves.

The only mystery about Guaranteed! is why it’s not playing for long runs in Ireland’s major theatres. It is, in the proper sense, a national event, a piece of theatre that performs a real public service by making the banking collapse immediate, visible and comprehensible. It is a cheap, no-frills production with nothing cheap in its writing or staging. There is obviously a huge appetite both for the play and the post-show discussions that follow it. Yet, it has played just eight performances, the last of them in Tallaght on Tuesday.

There’s something a little weird about this. Guaranteed! has tremendous potential as a civic experience, an occasion and provocation for national reflection. It could, to think ambitiously, be staged simultaneously in every town and city in the State on a given night – followed by real, open debates about the crash and its consequences. It could be adapted easily for prime-time TV or radio.

It might remind people that the arts community has the guts to do what the political system has failed to do, and open up the narrative of how we got to where we are.