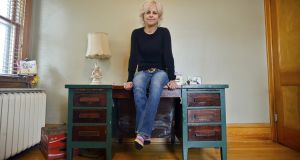 Faraway places with strange-sounding names have served as settings for numerous children’s and young- adult novels. In the hands of less talented writers these can become little more than opportunities to drop a few exotic names into the narratives. In the more successful examples the settings are integral parts of those narratives, making their own contributions to the fuller enjoyment of plot, characters and theme.

Of current young-adult fiction Bonnie-Sue Hitchcock’s remarkable debut, The Smell of Other People’s Houses (Faber & Faber, £7.99), demonstrates how the skilful interplay between setting and narrative can result in engrossing writing.

It is the early 1970s, and we are in an Alaska still learning to accommodate itself to its statehood, which was granted in 1959. There is much talk of political change and its possible repercussions on the fishing community whose members, particularly its young people, are at the heart of the novel. And, somewhere around, there are reminders of a new state’s continuing anxieties about racial and social problems.

As the plot evolves the emphasis subtly shifts from the political to the personal, and our attention focuses on four teenagers brought together in their initially separate moves towards finding a place in the adult world.

In a masterly feat of storytelling Hitchcock structures her novel as a succession of first-person narratives, set against reminders of seasonal growth and change. The individual voices of Ruth, Dora, Alyse and Hank convey, often very poignantly, their individual dilemmas and difficulties.

Even more telling, perhaps, is the depiction of the dramatic changes in their lives once these begin to intertwine. They are, in the main, sympathetic characters, eventually united in their understanding of the significance of friendship and, above all, family.

These may seem weighty matters, but Hitchcock approaches them with a lightness of touch, indeed a lyricism, that should enhance their appreciation by teenage readers.

Whether on land or sea (and some of the moments at sea are extremely powerfully written) the adventures of our four teenagers are portrayed in a manner that should stand them in good stead when it finally becomes their turn to meet – on their own – the challenges of the changing Alaskan world.

With a backlist of just under 20 children’s and young-adult novels (many of them winners of some of the most prestigious awards in children’s literature), the American writer Kate DiCamillo creates fictions that, more than anything else, see with an experienced eye into the hearts and minds, the dreams and disappointments, of her young characters.

Set in the Florida of the 1970s, DiCamillo’s new novel, Raymie Nightingale (Walker Books, £9.99), takes as its starting point a young girl’s determination to find a father who has absconded with his dental-hygienist girlfriend.

Ingeniously, Raymie, the girl in question, attempts to create a set of circumstances that may bring her and her father together again. She has also, however, to keep in mind her developing friendship with two other girls, Louisiana and Beverly, whose involvement in Raymie’s story can sometimes seem a help, sometimes a hindrance.

The cast of characters here is a few years younger than those encountered in the more usual young-adult novel, but they are already developing responses that enable them to cope with the contradictions and confusions of an adult world, with its list of “impossibly answerable” questions.

DiCamillo’s chapters are short, her style an attractive mixture of the plain and the lyrical, and her manipulation of the techniques of storytelling a joy to share.

Although novels about serious childhood and teenage illness are now quite a common element of the juvenile publishing industry, it is rare to encounter one which treats the subject with such insight or emotional intensity as Kim Hood’s Plain Jane (O’Brien Press, €8.99).

This must be one of the most powerful novels to have emanated for some time from an Irish publisher; Hood, although born in Canada, where her story is set, currently lives in Ireland.

It might, too easily, be summarised as “a tale of two sisters”. But such an inadequate description gives little indication of the nature of the relationship between the sisters – or of the personal, familial and, above all, medical entanglements in which their lives become ensnared.

Jane watches her sister Emma, three years her junior, lie in her hospital bed, dying from cancer, a situation that increasingly takes its toll on Jane. “The cancer had become a pretty black hole in my life” as she says at one point – not to mention the black hole created by her various efforts to establish some sort of understanding with her parents, her young male friends, her classmates and her grandfather.

Hood’s insights into the complexity of feeling experienced by a young woman in Jane’s position are portrayed with clarity and sharpness, but without ever allowing notions of sentimentality to intrude. Jane, in fact, has her unlikable aspects. But as her own story progresses and the reader comes to enter unexpected territories, many of her earlier attitudes and behaviour begin to slot more understandably into place.

Readers who might find these three novels too heavy for their summer suitcases should make their way to something altogether more light-hearted, though none the less entertaining. MG Leonard’s Beetle Boy (Chicken House, £6.99) sees a 13-year-old embark on a search for his missing entomologist father, a search that brings him into contact with a colossal rhinoceros beetle. The ensuing friendship between boy and beetle is drawn with an infectious sense of humour, as are many of the creatures (human and otherwise) met along the way. Great fun – and warmly recommended.