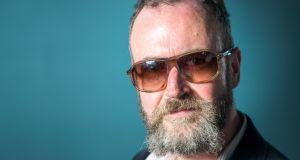 Let me tell you about Olivia Newton-John’s broken zipper. It’s one clue left unsolved by David Keenan in his transcendent shaggy dog story, Xstabeth. The novel is a quixotic achievement by one of our most exciting writers. As a rock’n’roll fairy story and myth about the Muse, it’s a triumph. I was less enamoured by its view of women.

The title refers to the LP created accidentally by failing musician Tomasz in a club in St Petersburg, resuscitating his career. The story of how Xstabeth becomes a cult album, haunting her creator, is narrated by Tomasz’s devoted daughter, 19-year-old Aneliya. In Slavic languages, her name translates as angel, a hidden clue.

4 Mary Coughlan: ‘32 times I ended up in hospital with alcohol poisoning’

8 My first year as an ex-TD: ‘I looked for jobs, but I didn’t make the grade’

11 Garda trauma: Sean was a garda for six weeks when he saw his first body

12 Teaching was Jerry Kiernan’s vocation; in 30 years he never missed a day

16 Ireland’s lost golf courses: What happens when the gates close?

23 Richie Power: ‘To me, Kilkenny’s problem is at the roots’

24 Covid-19 and travel: Quarantine and increased Garda checks near Dublin airport on cards

25 Cold and working from home? How to stay warm without whacking up the heating

26 Covid-19 infection rate in hospitals ‘out of control’

28 ‘I got a burning smell in my nose’: Third-wave Covid-19 patients share their experiences

29 Behind Her Eyes: Eve Hewson could have found star-making role in Netflix thriller

30 Remote working ‘revolution’ bringing people back to towns and villages

35 Parents of children with special needs: ‘We are emotional and exhausted’

38 Golf club membership in Ireland: What deals are clubs offering?

39 Coronavirus search: See how Covid-19 is spreading in your area