Book review: Lily King’s latest book is about grief and the tenacity to persist in the pursuit of an artistic vision 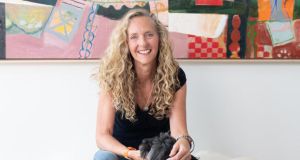 Lily King: Writers & Lovers is her best book yet.

In Lily King’s portrait of the artist as a young woman, Casey is a 31-year-old aspiring author living in late-1990s Massachusetts. She waits tables at an upscale restaurant to pay the bills, which include payments on a crippling $73,000 of debt. “I have a pact with myself not to think about money in the morning,” the book opens. “I’m like a teenager trying not to think about sex.”

Money isn’t the only thing Casey has to push out of her mind to work on her manuscript. She is grieving her mother, who died suddenly while on holiday with friends. She is also tending to a broken heart after the end of an affair with a poet she met at an artists’ residency shortly after her mother’s death: “In the morning I ache for my mother. But late at night it is Luke I mourn for.”

1 Many people identified as close contacts refusing to come forward for Covid-19 testing
2 David McWilliams: ‘Ireland is three decisions away from being a perfect country’
3 Two in custody after Ryanair flight to Dublin forced to divert
4 My aunt never told us that Gran passed away with no will
5 A US food writer moved to Ireland. Here’s what he found
6 Leo Varadkar says Barry Cowen has more questions to answer
7 Game Changers: Gary O’Toole took a stand when others turned their heads
8 Mandatory quarantine and flight cancellations unlikely despite rise in cases
9 Marian Keyes: ‘I thought when I stopped drinking my life was over. It was just beginning’
10 Green Party TD queries ‘usefulness’ of another appeal in €13bn Apple tax case
11 Gerry Thornley: Munster will make for interesting case study when rugby resumes
12 Fintan O’Toole: Jack Charlton allowed us to accept the English part of our Irishness
13 Naya Rivera: Glee actor’s body found in lake, authorities say
14 Covid-19 laces granting of Irish citizenship with danger
15 Government to push through €2bn credit guarantee scheme next week
16 If it’s safe to do so, could this be the time to spend for Ireland?
17 US passengers fly into Dublin: ‘I’m here for six days. I guess I’ll have to stay inside’
18 The $6bn judgment pitting Nigeria against Irish businessmen
19 California shuts down again as US coronavirus cases surge
20 Warnings over theft and scams after fourfold rise in puppy prices
21 How safe are beauty treatments? A spa session reveals a new world
22 Thandie Newton names names. Will Hollywood punish her?
23 Brussels plans attack on low-tax member states
24 My daughter won’t go out to meet friends after lockdown
25 Costs and borrowing rules locking a generation out of home ownership, builder warns
26 Donegal garda ‘shocked’ at spike in drink- and drug-driving during lockdown
27 Roger Wilson tackling the problem of bad technique in Texas high school football
28 McKinsey warned Wirecard a year ago to take ‘immediate action’ on controls
29 Covid anxiety among domestic holidaymakers could sink this summer
30 Fr Enda McDonagh remains powerful voice for theology at the fringe
31 Covid-19: 200 to 250 people arriving in Ireland from US daily - Coveney
32 Man in his 40s due in court over damage to Luke Kelly sculpture
33 Majority of employees don’t want to return to pre-Covid working patterns
34 James McClean says he gets no support for abuse he receives
35 Georgia and Fiji in line to join Six Nations sides in eight-team tournament
36 Cowen under pressure to answer further questions on gardaí encounter
37 ‘Mother Mooney’, the Mayo woman who campaigned for justice for her wronged son
38 Coronavirus: Parents of new babies to get three extra weeks’ leave
39 Random coronavirus testing for people entering Ireland under consideration, says Varadkar
40 Trump commutation ‘saved my life’, Roger Stone tells Fox News
Real news has value SUBSCRIBE