William Trevor: Writers are outsiders with no place in society

Obituary: Writer of ‘The Ballroom of Romance’ and novelist made Irish themes universal 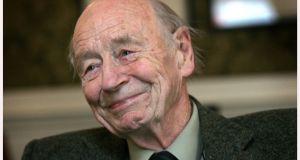 William Trevor: “What is important is to take Irish provincialism . . . and to make it universal.” Photograph Brenda Fitzsimons

William Trevor, one of the most prolific, successful, well-respected and well-loved of modern Irish writers, has died at the age of 88.

He was perhaps unusual in maintaining something of an equal commitment to both the novel and the short-story form during his writing life.

He remained faithful to the short-story form because he regarded it as, in the words of one critic, “the natural expressive idiom of his native land”.

In his introduction to the Oxford Book of Irish Short Stories (1989), he wrote: “The Irish delight in stories, of whatever kind, because their telling and their reception are by now instinctive.”

When his novel Love and Summer was shortlisted for the 2011 International Impac Dublin Award, Eileen Battersby described Trevor in The Irish Times as “revered by writers and readers all over the world” and as “living proof that fiction is an international language and that story is universal”.

William Trevor Cox was born in Mitchelstown, Co Cork. His father James William Cox, originally from Co Roscommon, worked in the bank, and his mother, Gertrude Davison from Co Armagh, was also a bank clerk until marriage.

In an interview he gave to the Guardian in September 2009, he described his parents as “lace-curtain Protestant” (ie, they did not belong to the “big house” or Anglo-Irish ascendancy), who hated each other.

He had two siblings and they were raised in what he recalled as a very lonely household.

He could never understand why his parents didn’t get on or make some effort to resolve their differences; he wondered if something had happened in the relationship that was hidden from the rest of the world.

This background may explain many of the characters he later created in his fiction.

His father’s bank job meant the family moved to various towns with each promotion he got. This resulted in Trevor attending 11 different primary schools.

The first of these was the Loreto in Youghal, where he was one of the few Protestant children.

In Excursions in the Real World (1993), he wrote: “I was treated fondly and recall neither prejudice nor attempts at religious influence.”

When the family moved to Skibbereen and he was sent to a Protestant school, where “education was less pleasant”.

After that, there were moves to Tipperary and Enniscorthy. For his secondary schooling he boarded at Sandford Park and afterwards St Columba’s College, both in Dublin.

At St Columba’s, his art teacher was Oisín Kelly, who became a famous sculptor and who encouraged Trevor’s interest in the subject.

He went to Trinity College Dublin in 1946 where, faute de mieux as he said himself, he studied history.

Following graduation, he taught in a private school near Killyleagh, Co Armagh, from 1950 to 1952.

He had met Jane Ryan at Trinity and they married in 1952. When his school closed and with Ireland in a deep recession, they emigrated to England.

He also worked as a church sculptor for seven years, “rather like Jude the Obscure but without the talent”, he told the Guardian in 2009.

With the birth of his first child he needed a better-paying job and the family moved to London, where he made a living writing advertisements.

“They would give me four lines or so to write and four or five days to write it in.

“It was so boring. But they had given me this typewriter to work on, so I just started writing stories. I sometimes think all the people who were missing in my sculpture gushed out into the stories.”

In an interview for the Paris Review (spring 1989), he listed Somerset Maugham as his first strong influence, followed by Joyce and Irish short-story writers such as Frank O’Connor.

Through having short stories published in the London Magazine and the Transatlantic Review, he was approached by an editor who suggested he write a novel.

The result was The Old Boys (1964), which tells of the petty rivalries and odd behaviour of members of the alumni association of a small English public school.

It won the Hawthornden Prize and its success led to Trevor adapting it for television and then the stage. This meant he could give up the advertising-writing job, move to a small village in Devon and become a full-time writer.

The Boarding House (1965) continued his interest in eccentrics and misfits, in a story where the boarders scheme against each other.

The Love Department (1966) was a darkly comic story of a sexual pervert who gets his just deserts.

All three novels showed Trevor’s subtle comic vision as he created characters who were doomed in some way. A short-story collection The Day We Got Drunk on Cake and Other Stories (1967) followed, with its array of funny, melancholic and brutal characters.

The novels Mrs Eckdorf in O’Neill’s Hotel (1969) and Miss Gomez and the Brethren (1971) presented more characters living on the margin, their lives troubled by failure and disappointment.

Up to this he had written mainly about the foibles of the English middle classes, viewing them from the perspective of a fascinated outsider.

Being an Irish Protestant meant he was also somewhat of an outsider in his own country. He believed that writers were outsiders, that they had no place in society because society was what they were watching.

He liked to live in the shadows and disliked the limelight.

The title story of The Ballroom of Romance and Other Stories (1972) is possibly his most famous short story.

Bridie, the main character, is a typical Trevor creation, lonely and yearning for love, her life stultified by the social realities of the rural Ireland of the time.

Graham Greene described Angels at the Ritz as “one of the best collections, if not the best, since James Joyce’s Dubliners”.

Short-story collections were Beyond the Pale (1981), The News from Ireland (1986) and Family Sins (1989), which won the Irish Times Irish Literature Prize for Fiction.

Two Lives (1991) included Reading Turgenev (also awarded the Irish Literature Prize for Fiction) and My House in Umbria, in both of which the line between fact and imagination is blurred.

Juliet’s Story (1992) was his only children’s book, while the ambiguous Felicia’s Journey (1994) won Irish Times and Sunday Express awards as well as Whitbread Book of the Year.

The short-story collections After Rain (1996) and The Hill Bachelors (2000) both won this paper’s Irish Literature Prize for Fiction, the latter also winning a PEN/Macmillan Award.

The Story of Lucy Gault (2002) was, according to one critic, “quite possibly the saddest story you have ever heard”; its pervasive theme is guilt and the need for forgiveness, especially self-forgiveness.

In the Guardian interview already mentioned, Trevor said that guilt, sorrow, shame and secrets were part of life.

“People should feel guilty sometimes. I’ve written a lot about guilt. I think that it can be something that really renews people.” Lucy Gault was shortlisted for the Booker Prize.

His short-story collections A Bit on the Side (2004) and Cheating at Canasta (2007) have the familiar characters on the margins, who are lonely, and the familiar themes of shame, fear and isolation.

By contrast, the novel, Love and Summer (2009), which made it to the Booker longlist, is his most benign work and showed his writing powers undiminished in his 80s.

He was acclaimed both in the UK and Ireland. He was awarded an honorary CBE in 1977 for his services to literature and presented with an honorary knighthood in 2002.

Further, he was awarded the Bob Hughes Lifetime Achievement Award in Irish Literature in 2008 and in 2011 he was elected saoi in Aosdána.

He told the Paris Review that he considered himself an Irish writer because, as an Irishman, he felt he belonged to the Irish tradition.

“I don’t really feel that being Irish is the important thing. What is important is to take Irish provincialism – which is what I happen to know about because it’s what I came from – and to make it universal.”

Trevor was a very disciplined writer, for much of his life being at his writing desk at 4am. Even as he got older, he continued the early start to his day, at the slightly later time of 6am or 6.30am.

He did an enormous amount of rewriting, often cutting large swathes of text, believing that what was omitted from a story could be as important as what was included.

The rest of the day he spent in his garden and at chats over cups of tea with his wife, Jane, to whom all his books are dedicated.

He is survived by her and by his sons Patrick and Dominic.