Why the Germans Do it Better: A lively, affectionate portrait

Book review: A lament on the state of contemporary, growth-stunted Britain as well as a paean to Germany 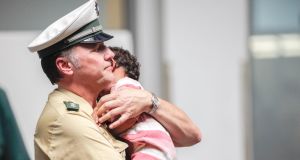 When, in 2015, Angela Merkel opened Germany’s doors to a wave of refugees bigger than any seen in Europe since the war, she divided opinion at home and caused consternation among her country’s neighbours. Merkel would pay a big political price. She was forced to bring forward the date of her retirement.

She was attacked for showing naivete but also for the opposite: behind her act of compassion, her detractors claimed, was a cold political calculation that welcoming migrants from the east could help offset the long-term demographic problems presented by Germany’s ageing population while, more immediately, averting the irreparable EU split that seemed a real prospect in those tumultuous days.

9 ‘Doug and Kamala together are almost vomit-inducingly cute and couply’: The VP’s stepkids speak

10 Covid-19: Nphet warns of a ‘large number’ of deaths in coming weeks

16 Cold and working from home? How to stay warm without whacking up the heating

19 Damian de Allende settling in at Munster after rollercoaster start

23 ‘I should be feeling despondent. I don’t’: Chefs dish up the truth about life in lockdown

24 Covid-19: Which windows to open to keep your car a low-risk zone

25 The Irishman with big hopes making tiny houses in Berlin

27 A full-on Zero Covid-19 strategy is unlikely, but Irish hybrid a possibility

28 Growing pressure for ban on non-essential travel within EU

30 Can five minutes’ exercise a day make you fit?

31 Covid-19: Proposed £500 payout for anyone testing positive in England

36 Cottage with investor appeal in booming D4 enclave for €650k

37 In Bling Empire people hang out of cars with their shirts off. Big deal. I did that in Newbridge