Why the Áras furnished Letterfrack with storm-felled trees 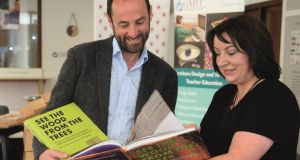 Dermot O’Donovan and Marion McGarry of GMIT Letterfrack, authors of See The Wood From The Trees

Towards the end of 2013 and into the early months of 2014, Ireland was battered by several storms bringing with them violent winds and heavy rain. Across the country trees were damaged and felled by the storms. The parkland at Áras an Uachtaráin was not spared. Mighty oaks, ash and beech, estimated to be about 250 years old, were among the casualties.

Under normal circumstances felled trees, such as these, are used for fire wood or wood chippings. However, these trees were destined for an outcome which was more in keeping with their significance. Located in the grounds of the former viceregal lodge, now the residence of the President of Ireland, they had witnessed the rise and the demise of the British empire in Ireland as well as the emergence and development of the Irish Republic. What now to do with those elegant but felled trees? In an inspired gesture, President Michael D Higgins decided to gift the timber to Galway-Mayo Institute of Technology (GMIT) Letterfrack, for use by the staff and students in furniture design and technology projects.

Thus continued an interesting collaboration between Áras an Uachtaráin and the unique third-level campus in Letterfrack. We tell the story of those trees and their afterlife in our new book, See The Wood From The Trees.

GMIT Letterfrack is renowned for producing graduates with skills in fine furniture-making and manufacturing technology. Previously under the tenure of President Mary McAleese students at the campus had been tasked with making lecterns for the Áras; subsequently graduate John Lee was commissioned to design and make the presidential inauguration chair, first used by President Higgins in 2011.

President Higgins and his wife Sabina took great interest in the journey of the timber from its demise to its resurrection via creative projects and visited the college on formal and occasional informal visits to follow its progress. It was over a year before the timber was ready for use and students had to work around natural defects and figured grain not typically found in timber from plantation forests. But therein lay the beauty of the project: working with wood with a “story”, with imperfections, and showcasing the exclusivity of the material.

Of course, working with timber is a privilege in itself: each tree is unique and takes many decades to mature. Inherent in our degree programmes, we aim to inspire students to source timber sustainability and to choose efficient manufacturing processes, optimise the material, minimise waste, and consider the full lifecycle of timber products. We are very proud of our Green Campus credentials and the fact that we have planted more that 4,000 trees in the grounds of neighbouring Connemara National Park.

See The Wood From The Trees observes Ireland’s position as one of the least-forested countries in Europe, a situation that goes back to the so-called “timber famine” that began in the 17th century, when huge tracts of our ancient forests were felled. As a direct consequence of the scarcity of wood, we lost many of our traditional woodcraft skills.

Prior to the 17th-century devastation, Ireland was rich with deciduous woodland, and respect for trees was evident in the Irish social, legal and cultural realms. The Brehon Laws legislated for damage to trees; poetry and the Ogham script took inspiration from trees; people worshipped trees and countless Irish place-names derived from trees, from Derry to Clonakilty. The reverence shown to trees is observed in See The Wood From The Trees by the inclusion of beautifully illustrated The Farmleigh Tree Alphabet by poet Theo Dorgan.

The story of GMIT’s campus in the village of Letterfrack – although housed in the notorious former industrial school – is one of renewal, revival and creativity. Established in 1987 as a partnership with Connemara West plc, a pioneering rural development company, the campus now accommodates more than 200 students and has expanded its offerings to include degrees in design, technology and teacher education.

The felled timber has been used by students to produce beautifully crafted items as diverse as public seating, sculptural pieces, smaller items such as platters and boxes and even a presentation case for the limited collector’s edition of this book.The highly-visual and beautifully illustrated book includes photographs of this work and tells the students’ stories too: their sense of pride in working with the timber from the Arás; the methodologies they used, and their design processes. Alongside all this, we look at the history of the trees, the demesne at Phoenix Park and how the park ranger’s hunting lodge gradually evolved into the splendid residence it is today. But mostly we showcase the magnificence of trees, their beauty, their versatility, their practicality and their afterlife thanks to the foresight of President Higgins and the creativity of our students.

We were honoured that President Higgins provided the foreword and the introduction by ecologist Duncan Stewart provides the wider context by highlighting the importance of trees in addressing contemporary challenges of climate change, rural sustainability and the need for collaborative structures. The book is stunningly designed by Vincent Murphy and published by by Artisan House, an award-winning publisher also located in Letterfrack.
See The Wood From The Trees by Marion McGarry, Dermot O’Donovan is published by Artisan House. It will be launched at the Clifden Arts Festival on Friday, September 14th. The book is available in three editions: hardback (available nationwide); special limited edition and deluxe collectors edition (limited to 15 copies only and presented in a case made from felled ash from Arás an Uachtaráin). The limited editions are available directly from the publisher, Artisan House www.artisanhouse.ie
Dr Marion McGarry is an author and lecturer at GMIT Letterfrack. Dermot O’Donovan is the Head of Centre, GMIT Letterfrack. To find out more about GMIT Letterfrack visit www.gmit.ie/letterfrack

Kesha: ‘If you say the wrong thing now, your career is, hashtag, cancelled’
3

A Beautiful Day in the Neighborhood: A tremendous film a great young director
5