An existentialist classic not unlike Camus’ The Outsider, this compelling read drills ever deeper into the dark recesses of a tortured artist’s unrepentant soul. What's your favourite book? Send us your review of a title you love to books@irishtimes.com and each week, we will publish one. 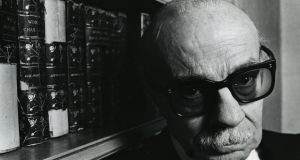 Argentine writer Ernesto Sábato (1911-2011): in his introduction to the Penguin edition of The Tunnel, Colm Tóibín sees Sábato as someone clearly influenced by Dostoyevsky and Kafka, most evident in the dark canvas he sketched of the human condition. Photograph: Gary Cameron/The Washington Post via Getty Images

On the recommendation of my son, I recently read the classic Argentine novel, The Tunnel, by Ernesto Sábato (1911-2011). As a self-confessed fan of Camus, it was always likely that I would respond positively to what The New York Times Book Review described as “an existentialist classic”.

Published initially in the literary magazine Sur in 1948, The Tunnel shares a certain number of traits with Camus’ The Outsider. Both have a first-person narrator who ends up incarcerated after being convicted of murder and from their prison cells they review the incidents and chance encounters that led to their present impasse.

In his introduction to the Penguin edition of The Tunnel, Colm Tóibín sees Sábato as someone who was clearly influenced by writers such as Dostoyevsky and Kafka, an influence that is most evident in the dark canvas he sketched of the human condition. Tóibín notes: “[...] there are moments when the rules governing despair are so closely undermined or re-examined or dramatised that the entire enterprise of living or thinking seems deeply absurd”.

The novel recounts the complex relationship between the artist Juan Pablo Castel and Maria Iribarne Hunter, whom he first observes staring raptly at one of his paintings. He has the impression that this woman can see into his soul, that she is somehow capable of understanding the emotion behind his artistic creation. He is smitten immediately and does everything in his power to become Maria’s lover.

But sex, once achieved, does not have the desired effect: “All we accomplished was to confirm the impossibility of prolonging or strengthening oneness through a physical act.” Castel is an obsessive individual whose disdain for others leads to a haughty aloofness. Like Camus’ Meursault, the anti-hero of The Outsider, he does possess an impressive lucidity when it comes to self-analysis, as is clear from the following lines: “Usually that feeling of being alone in the world is accompanied by a condescending sense of superiority. I scorn all humankind; people around me seem vile, sordid, stupid, greedy, gross, niggardly. I do not fear solitude; it is almost Olympian.”

A person who extols the virtues of solitude in this way, who constantly sees faults in the people he meets or observes walking along the streets of the city, whose distrust of human nature is evident in the jealousy and insecurity that characterise his dealings with Maria, is far from being an ideal lover or companion. As expected therefore, the darkness soon takes control and, clinging desperately to the misplaced suspicion that Maria is deceiving him with other men, he drives in a mad rage to the estancia where she is staying with her cousin, arrives in her bedroom and plunges a knife several times into her breast and stomach.

One wonders if Sábato, in painting Castel in such a poor light, is underlining a certain weakness in the artistic disposition. Prone to emotional outbursts and trips of fancy, hugely sensitive to human beauty, Castel is portrayed as living at a remove from reality. He sees things through a skewed lens: Maria was not deceiving him, as her blind protector Allende (not so blind that he cannot see the truth of the situation) informs Castel. If anything, she was hopelessly in love and yet fearful of the darkness she saw in him and in his painting.

Castel is not comfortable in his own skin: “It also happens that when we have reached the limits of despair that precede suicide, when we have exhausted the inventory of every evil and reached the point where evil is invincible, then any sign of goodness, however infinitesimal, becomes momentous, and we grasp for it as we would claw for a tree root to keep from hurtling into an abyss.”

Camus once noted that the greatest choice facing man in an absurd world was whether or not to commit suicide. Sábato’s character grapples with similar existential choices. There is no sign of remorse in Castel as he reflects on his actions in prison. He watches the sun rising on a new day and thinks of those men and women waking up in Buenos Aires, eating their breakfasts and leading lives that might not be as devoid of meaning as his own was: “I felt that a black chasm was yawning inside me”.

One wonders how Sábato managed to struggle through almost a century of existence if this attitude reflects his own views. The Tunnel never emerges into the light, but instead drills deeper and deeper into the dark recesses of Castel’s unrepentant soul. Yet in spite, or perhaps because, of that, it is a compelling read.

Eamon Maher is director of the National Centre for Franco-Irish Studies in IT Tallaght and general editor of the Reimagining Ireland book series with Peter Lang, Oxford. His latest book, co-edited with Eugene O’Brien, is From Prosperity to Austerity: A socio-cultural Critique of the Celtic Tiger and its Aftermath (Manchester University Press), which will be reviewed by Brian Lucey in The Irish Times this Saturday.