What kind of God did Shakespeare believe in?

The playwright’s religion is as hard to pin down as the man himself, as this pithy, elegant and eminently sensible overview makes clear 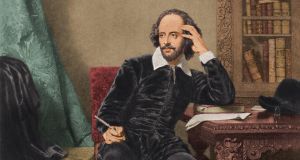 Circa 1600, English dramatist and poet William Shakespeare (1564 - 1616) ponders his next work. (Photo by Stock Montage/Getty Images)

Book Title:
A Will to Believe: Shakespeare and Religion.

Shakespeare’s confessional allegiance has been investigated with ever increasing vigour in the past two decades. Not only has there been a turn to religion in literary studies but there are now sophisticated ways to explore and compare early modern texts that promise to tell us more about what people thought, believed and shared.

As David Kastan points out in his pithy, elegant and eminently sensible overview, the question of Shakespeare’s possible Catholicism was raised so frequently in the popular press that it managed to quieten speculation that the man from Stratford was really the earl of Oxford.

But no definite conclusion has been reached. When Shakespeare lamented the “bare ruined choirs” of the destroyed monasteries in sonnet 73 he was not necessarily signalling his opposition to Henry VIII’s brutal reforms or secretly recording his sympathy for the Catholic underground. Rather, he was expressing his dismay at the fracturing of late-medieval Christendom, a traumatic division that horrified Catholics and Protestants alike.

The Catholic taunt, “Where was your church before Luther?” hit at a deep-seated fear in Reformers that they were living in a brave new world in which there was no obvious traditional institution to guide them. The bull of 1570 declaring that Elizabeth I was a heretic and should be deposed by loyal Catholics dismayed many who had no desire to become Counter-Reformation terrorists and would have preferred to live in peace with their Protestant neighbours.

Kastan suggests that Shakespeare, whichever side of the divide he favoured, valued community at least as much as personal belief. He lived in a time when religion was a communal act, something shared by a group of believers with a common purpose and so part of the stuff of everyday life, not a private belief cut off from the world. What is notable about his plays is their easy acceptance of religious difference.

Kastan is especially acute on Measure for Measure . The play is set in Catholic Vienna, and its English Protestant audiences would have witnessed friars administering confession, and women planning to take the veil, as integral elements of a plot about guilty behaviour, repression and sin. Clearly nobody had any significant problems with the play, even in times of cautious and often repressive religious censorship, and it was performed at court. But Catholic censors did, and the play was torn out of the second folio that was held at St Alban’s College, the seminary established by the English Jesuit Robert Parsons in 1589.


Censorship
Kastan suggests that what probably disturbed the censor, William Sankey, most particularly was the disguise of the duke as a friar, “ministering to the community as if he were one”. Sankey could remove offending elements from other plays, such as the praise of Archbishop Cranmer in Henry VIII , but could not solve a problematic plot. Kastan draws the most sensible conclusion: if Shakespeare was a secret Catholic, why was a Jesuit who clearly admired Shakespeare unable to see it?

So what was Shakespeare’s religion? Kastan provides a review of the evidence that should be the first port of call for anyone interested in the subject. Of course, Shakespeare wrote mainly plays, works of literature that are particularly removed from being the personal testimony of the author. (Poetry is a better hunting ground.) Plays were communal works. Far more were jointly written than has often been realised; there is a great deal of evidence that particular parts were written for specific actors; companies staged distinctive types of plays tailored to their audience’s expectations; and Shakespeare, a shareholder in the Globe, was a company man.

We should expect to be able to read in the plays not religious belief but a discussion of issues relevant to audiences. The plays are saturated in biblical imagery, but this tells us very little beyond the central role of the Bible. (As Kastan points out, Archbishop Laud quotes from the Geneva Bible that he had banned, suggesting that we cannot even read anything into which Bible is cited.) When Richard II compares his sufferings to those of Christ it shows that he is a deluded man with a weak understanding of his own religious identity, not that Shakespeare thought that kings were gods.

And the old cliche is true: Shakespeare was an enigmatic and ambiguous writer. His works provide as little encouragement for those eager to see him as a committed Protestant as they do for those eager to seem him as a committed Catholic. For many 16th- and 17th-century readers King John was not simply the egregious “lackland” of Robin Hood legend but a brave proto-Protestant who stood up to the tyrannical demands of the pope. John Bale’s play, which Kastan generously claims is not as bad as its detractors claim, made this case, but Shakespeare’s does not, representing a weak, selfish and ineffective ruler who is, nevertheless, a victim of a papal conspiracy.


Religious puzzle
What of the evidence of personal belief, particularly the Borromeo testament found in Shakespeare’s father’s rafters? This document, in which John Shakespeare declares his adherence to the “Catholic, Roman, and Apostolic Church”, and acknowledges the divine role of the Virgin and prays for souls in Purgatory, is a real puzzle. It is not a straightforward forgery, as Victorians, certain of Shakespeare’s identity as a true English patriotic Protestant, believed. The document, now lost but recorded by the great Shakespeare scholar Edmund Malone in 1790, is largely an almost word-perfect reproduction of the spiritual testament drawn up by Cardinal Borromeo, archbishop of Milan and Counter-Reformation crusader.

Although other sections of the document are not credible – John Shakespeare asks his kinsmen and friends to pray for his parents even though they had died before Borromeo wrote his testament, and other passages sound very Protestant indeed – much is, which seems to leave us with the odd coincidence that the only copy of the Borromeo testament in England “just happened to be subscribed to by the father of perhaps the most famous of all Englishmen”, in Robert Bearman’s words.

Furthermore, it was apparently found hidden in the roof, which suggests that it was not used daily, and Shakespeare’s own will is conspicuously Protestant in style and tone. If Shakespeare was raised in the shadow of traditional religion it appears that he “died a Protestant”.

Kastan has surveyed the evidence with scrupulous care and so has earned the right to speculate. He suggests, following Christopher Haigh, that Shakespeare was probably a “Parish Anglican”, a tolerant, largely habitual Christian, who recognised the “communal values of village harmony and worship and objected to the divisiveness of the godly”.

A Will to Believe is a substantial work by one of the major Shakespeareans of our time. It matches deft critical ability with proper scholarship, wide and deep learning with acute judgment. Shakespeare, for Kastan, remains an elusive figure. His final chapter, on Hamlet , suggests that Shakespeare’s delight in conundrums goes even deeper than we might imagine. Hamlet laments that we do not know what happens after we die but wonders whether to act based on the testimony of a traveller who has returned from beyond the grave. It is a dilemma that Shakespeare and his contemporaries, living in a confusing and disturbing world, habitually faced.

Andrew Hadfield is professor of English at Sussex University andauthor of Edmund Spenser: A Life and Shakespeare and Republicanism.