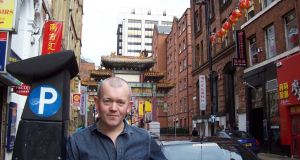 A poet first, Conor O’Callaghan has spoken of the burden of inheritance of the Yeatsian singing line. File photograph: Eve O’Callaghan

As its title implies, We Are Not in the World inhabits a hazy purgatory – temporal, spatial and psychological. Heartbroken after the end of an affair with a married woman, Paddy dusts off an old HGV licence, borrows a lorry from an ailing friend and takes a job driving from England down through France.

Kitty, his 20-something daughter, comes along for the ride, disobeying the insurance company’s no-passenger rule. Kitty has suffered a terrible trauma – “the thing that we never mention” – the details of which are revealed as the story drives towards its denouement.

11 Boy injured after bookcase fell on him secures settlement of €80,000

12 ‘He’ll be missed’: Locals turn out to say goodbye to popular shopkeeper

13 Is owning a home a pipe-dream for the young?

14 How supermarkets trick us into buying unhealthy food, and what we can do about it

20 At home with Hilary Weston

23 It’s as if censorship were back: Why Ireland can’t watch Wild Mountain Thyme this month

24 What now for AstraZeneca and Johnson & Johnson vaccines?

27 Louis Theroux: ‘I worry about giving offence, being judged, not coming up to scratch’

28 Q&A: Where do we stand on AstraZeneca vaccine now it is restricted to over-60s?

29 Covid-19: AstraZeneca vaccine should not be given to patients under 60, Niac advises as appointments cancelled

32 Tenant promises to pay compensation after removing rafters from house

34 Mary Coughlan revisits her past: ‘It was everywhere. Bags of cocaine, champagne and tequila’

37 Up to 15,000 vaccinations cancelled today following advice on AstraZeneca jab

39 ‘Fame? If you have any personal demons, you’re quite not prepared for it’

40 Is it sensible to delay vaccines if we are at risk of a fourth wave of the virus?