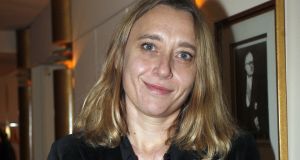 Virginie Despentes: An ‘apostle of the gutter’ like Zola. Photograph: Thomas Samson/AFP/Getty Images

Yes, I am in full agreement with you that head shots of people who have written books are an irrelevance. Still, nice to see that instead of the usual pic of the 50-year-old woman writer sitting at a table in a comfort cut and half-smiling wistfully into the mid-distance, Virginie Despentes, in a Motörhead vest, has a fag in her mouth and stares out through a cloud of smoke.

Despentes, who takes her name from the part of Lyon where she was a sex worker, is also a former maid and freelance rock journalist. She has written more than 15 books; the film version of her first novel, Baise-Moi, which she co-directed, was the first film to be banned in France for 28 years.