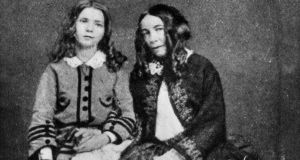 English poet and author of Aurora Leigh Elizabeth Barrett Browning (1806-1861), the wife of Robert Browning, with their son in Rome. Photograph: Hulton Archive/Getty

Ba’s father has bought nearly 500 acres, with a Big House, farm buildings and cottages, “to make yourself, Brother & Sister & dear Mamma happy”, as he tells her. It sounds like a fairytale, and in a way it is; though, as in any fairytale, not everything’s quite as it appears. The debt of happiness “dear Puss” must repay her father will eventually come to seem outsized, even grotesque.

Fiona Sampson’s passionate and exacting biography of Elizabeth Barrett Browning is a surprisingly compact volume, a bristling lyrical sandwich of philosophy and action. It is also a page-turner. Like many great 19th century novels, it begins with a charismatic house – Hope End in Herefordshire is brought dazzlingly to life on these pages. Like Mansfield Park or Thornfield Manor, Elizabeth’s childhood Eden is linked to property in the West Indies. Hope End is, however, not fictional and the plantations that lies behind its “Easy money. Dirty money.” are real, still relevant. “Over two centuries on, the murky waters of the Atlantic slave trade lap at all our feet, whether as deficit or profit.”

12 When a ‘good father’ decides to kill his whole family

17 Spring clean: 13 ways to spruce up your home – with or without a tradesperson

21 ‘We should have done better’: Cillian de Gascun, Paul Reid and Stephen Donnelly look back

22 Divers steal beer being aged by sunken ship off Argentina

35 Cliff Taylor: Finding an Irish solution to our Covid-19 problem

36 ‘There’s a slowness and lethargy in our children now, a low-level melancholy’