Trumpocalypse: A conservative Republican rips the Trump presidency to shreds

Book review: David Frum, speechwriter for George W Bush, does not hold back in damning Trump 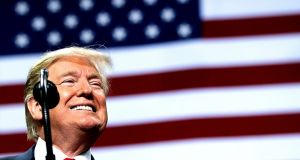 Donald Trump is, according to former speechwriter for George Bush, David Frum, a ‘very cruel man’

As we reach the fourth and possibly final year of the Donald Trump presidency, the appetite for books on the 45th president of the United States shows no sign of abating. The past few years have witnessed a plethora of tomes, most capitalising on the public fascination with the drama unfolding each day in the White House and the psychology of a man who has defied all presidential precedents of decorum and responsibility.

David Frum’s new book takes a different tack. Eschewing the well-worn path of focusing on the inner workings of the West Wing, Frum gives a different perspective – that of the conservative, Republican voice aghast at the man who has taken over the White House and his party.