Three hatreds drove him: the English, the Jews and de Valera 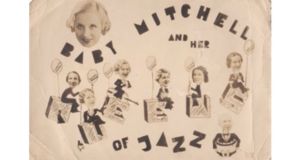 Zandra Mitchell came to Berlin’s Cabaret heartland in the mid-1920s with a successful “all-girl” band, the Queens of Jazz. She had played with Coleman Hawkins and Django Reinhardt

As the second World War began, a small group of Irish men and women remained in Berlin. In my novel, The City of Lies, an Irish detective finds himself there in 1940, and meets the “Berlin Irish”, among them Charles Bewley, sacked ambassador, writer Francis Stuart and sax player Zandra Mitchell.

Charles Bewley was Irish ambassador in Berlin from 1933-39. Three great hatreds drove his life: the English, the Jews and, latterly, Éamon de Valera. Part of the Quaker family of cafe fame, he was educated at Winchester and New College, Oxford. Throughout his education, he felt extremely hard done by, so much so that Oxford awarded him its top poetry prize, for his poem Atlantis!

Bewley’s Berlin reports gush Nazi support and Jewish conspiracies. When Jews tried to leave Germany, he ensured barely any received Irish visas. When it was proposed that 90 “non-Aryan Christian refugees” came to Ireland, he refused to process them. “It is notorious… that thousands of Jews have been baptized to avoid inconveniences to which they were exposed by membership of the Jewish religion”. This was only months after Kristallnacht. As Irish ambassador Charles Bewley personally prevented hundreds of Jewish refugees escaping Germany.

In the end, he was not only an embarrassment but a security risk. Recalled in 1939, he joined Goebbels’ Reich Propaganda Ministry. It didn’t take long for Goebbels to learn that he knew nothing about contemporary Irish politics and was toxic for Irish-German relations. He wrote a book that claimed de Valera was a fraud and a tool of British imperialism. It was only published in German. Although the Nazis conspired pointlessly with the IRA, they didn’t want to drive de Valera closer to Britain. They saw Irish neutrality as deadlier to Britain than it ever was. But if they didn’t understand the complex, contradictory relationship between the two islands, they realised Bewley was a liability.

He left Berlin abruptly and sat out the war in Rome. In his biography, Memoirs of a Wild Goose, he makes much of his internment by the British in Italy. But the British had no interest in him. Finding himself without identity papers, he applied to Dublin for a passport. Eventually he received one. In the “description” section, someone at Iveagh House had written: “A person of no importance”.

Bewley had a mistaken opinion of himself as a writer, but a writer who also lived on the fringes of German propaganda was Francis Stuart, a novelist of genuine ability. His life in wartime Berlin made and marred his reputation.

Stuart arrived in Berlin in 1940, with IRA messages for German military intelligence. He then worked as a radio propagandist. He may have held republican beliefs before he married Iseult Gonne, Maud’s daughter, when she was 17; he certainly did afterwards. But it is likely his flight to Berlin was as much about his unhappy marriage as putting himself, as he saw it, at the “eye of the storm”.

The storm proved less than stormy, until the end of the war. He eked a living writing and broadcasting. He claimed he refused to say anything anti-Semitic. That is partly borne out by his broadcasts to Ireland, but in Germany the words he uses endlessly, “bankers”, “international”, “financiers”, always subsumed the epithet “Jewish”. He was still part of a small Irish group that gave support to the Nazis, believing this was the road to Irish freedom.

“It was not the chances of war that brought me to Germany… I was heartily sick of…the great financial powers... I wanted to be among people who had also had enough of the old system and who claimed they had a new and better one.”

Stuart was in Berlin by choice, but still trapped. Life was dull and repetitive. He knew little of the outside world until everything collapsed. And then he was at the eye of the storm. It produced his best work, in particular The Pillar of Fire.

Much of Stuart’s reputation rests on his autobiographical fiction Black List Section H. The book is a considerable achievement, but it never moves from very good to great. Ultimately, he fails to do what he sets out to; to confront and dissect the moral ambiguity at the core of his time in Berlin. A book that could have been a Heart of Darkness journey, into himself, his own failings and contradictions, and into Nazi Germany, is full of omissions and scrupulously avoided paths. Stuart’s talent is not determined by what he did in Berlin, but he never let his prose loose. He gave less of himself, and Berlin, than he believed.

Zandra Mitchell came to Berlin’s Cabaret heartland in the mid-1920s. The city was famous for its freedom and licence, for experimentation in art, culture and even sexuality. She arrived with a successful “all-girl” band, the Queens of Jazz. She had played with Coleman Hawkins and Django Reinhardt. She became a vital part of Berlin’s club scene. And she witnessed the rise of Hitler to power.

Weimar culture was anathema to the Nazis. They closed the clubs and bars Zandra worked in. The “degenerate” music she played was banned – it symbolised the regime’s fantasies of racial miscegenation. By the mid-’30s Zandra was mostly out of work, but she stayed in Berlin and survived the war.

Sometimes she played the Reich’s official popular music, bland and saccharine, but jazz could be heard in private, in SS clubs, at officers’ parties, and in upmarket brothels. And throughout the war jazz standards were played in propaganda broadcasts to the English-speaking world by “Charlie’s Orchestra”, with parodied words to mock the Allies. This is You’re Driving Me Crazy.

Yes, the Germans are driving me crazy!

I thought I had brains

But they shattered my planes.”

As the war progressed most of the orchestra’s men were called up. Their places were taken by women and foreigners. There is no proof Zandra played with Charlie’s Orchestra, but she certainly would have known most of its members.

We don’t know what contact Zandra had with Berlin’s Irish community, though she kept in touch with the Irish legation. She left the city as the Soviet army approached. During her years in Berlin, Zandra had a daughter, but she had left her with others to be looked after, in order to find work. She never saw her again. Returning to Ireland in 1946, she lived out her life in Donegal, virtually a recluse. Oddly, she was one of the few Irish Berliners who had a weapon that quietly challenged everything Nazi ideology represented; it was her saxophone.
The City of Lies by Michael Russell is published by Constable, £13.99