This Land, The Story of a Movement by Owen Jones: Honest account of Corbyn’s failure

Book review: Commentator and activist writes with enthusiasm and pace 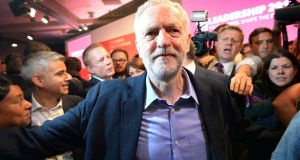 The 2015 election of Jeremy Corbyn as leader of the British Labour Party was, for many of us, a moment of hope in an otherwise bleak UK political landscape. A lifelong democratic socialist and thorn in the side of Tory and New Labour leaders, Corbyn was never meant to lead the party he had devoted his life to. But in that wonderful way that politics often surprises even the most seasoned of observers, the improbable happened. After almost 40 years on the margins of the party, the Labour left was back in charge, almost.

Owen Jones is a commentator, activist and Labour Party member. He was a former staffer for veteran Labour left-winger and Corbyn’s shadow chancellor John McDonnell from 2005 to 2008. This Land: The Story of a Movement is Jones’ open and bravely honest account of the rise and fall of the Corbyn project. It is written as a personal reflection from an active, if at times reluctant, supporter of Corbyn the man.

2 Food and mood: Why nutritional psychiatry is attracting attention

5 Maternity leave during lockdown has its advantages

6 Unionism not emotionally ready for conversation about united Ireland

8 Tenant promises to pay compensation after removing rafters from house

12 Newton Emerson: London and Dublin are making a problem of a solution

16 Michael McDowell: We have to stop pressing for a border poll

17 Covid-19: State on track to ease retail restrictions in May amid extra Pfizer vaccines

18 The US version of The Circle is brasher, more annoying – and twice as addictive

20 ‘I just want to be home’: Passengers scramble for the last pre-quarantine flight from Paris

23 ‘They could have killed me’: Man pushed off bicycle while cycling at Sally Gap

24 Hyundai i20: Korean overtakes some of its rivals in the supermini race

25 Q&A: What now for AstraZeneca and Johnson & Johnson vaccines?

26 The Khmer Rouge controversy: Why colourising old photos is always a falsification of history

28 Irish birds more endangered than ever before, report finds

30 Sean Bean: ‘The mango sex scene was a new level of weirdness’

34 Q&A: Which Level 5 restrictions are being lifted from today?