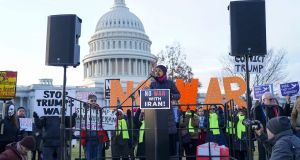 Ilhan Omar is as much defined by her opposition to Donald Trump as by her own political beliefs and achievements. Photograph: Leigh Vogel/Getty Images

Just under a year ago Donald Trump took to the stage at a rally in Greenville, North Carolina. The combative president, who had swept to victory in 2016’s election in part by stoking up visceral rage against Hillary Clinton, had a new target.

Ilhan Omar, a congresswoman from Minnesota, “looks down with contempt on hard-working Americans”, supports al-Qaeda and is viciously anti-Semitic, he claimed. “Send her back, send her back,” yelled the crowd, as Trump paused and stood back, letting the tension build.

1 50 best Irish albums of all time – in order
2 Keith Duggan: Bubba Wallace tweet shows just how troubled Donald Trump’s mind is
3 Cluster of Covid-19 infections at Kerry ‘house party’ investigated
4 Coronavirus: Two more deaths confirmed amid concern over new clusters
5 Thandie Newton names names. Will Hollywood punish her?
6 Jack Charlton’s own grievances endeared him to Irish fans
7 Brightest comet of the century visible in Irish skies for the next week
8 ‘At night I would go to my room to quietly drink.’ Irish women and addiction
9 David McWilliams: The Pandession is destroying Ireland’s Craic Economy
10 Johnny Depp: Ex-wife or friend defecated in bed in ‘fitting end’ to marriage, court hears
11 Reopening of pubs that do not serve food may be delayed beyond July 20th
12 Paschal Donohoe’s victory seen as a revolt against EU’s ‘big four’
13 My marriage is boring and polite. How do I make my husband interested in me?
14 Fintan O’Toole: In the US, the 19th century is coming to a very slow end
15 Jack Charlton: Tributes paid to ‘sporting icon’ and ‘father figure’
16 Hazel Chu: ‘The Green Party needs new leadership and a system overhaul’
17 ‘My rent here is so low it’s a joke’
18 Covid-19: Cases rise in US, India as Australian spike leads to localised lockdown
19 Belgium helps Ireland to a Brexit boon
20 Man (60s) killed as other driver ‘leaves scene’ of two-car crash
21 Hundreds of substitute teachers may be hired full-time to keep schools open
22 It’s time to end the Airbnb effect on Dublin’s housing supply
23 Dave Hannigan: Notre Dame’s Fighting Irish leprechaun needs its ass kicked
24 Monster or machine? Everything we know about coronavirus after six months
25 Many politicians remaining silent over online personal abuse
26 Jack Charlton’s tactics were divisive but he transformed Irish expectations
27 The Gael Becomes Irish: the prospects for the Irish language in Ireland today
28 John Bolton on Trump’s presidency: ‘Every day is a new adventure’
29 Paul McGrath pays tribute to ‘father figure’ Jack Charlton
30 Capturing Irish hearts and falling asleep in the Vatican: Jack Charlton in his own words
31 FF, FG should know Greens willing to walk away from government – Catherine Martin
32 Two injured after plane crash lands in Galway
33 Pat Leahy: Fianna Fáil acting like a circular firing squad
34 Sweden’s grim Covid-19 result: More death and nearly equal economic damage
35 Bobby Storey: The IRA's planner and enforcer who stayed in the shadows
36 This jewel of a gravel garden needs weeding just once a year
37 Jack Charlton obituary: One of Ireland’s greatest adopted sons
38 Our new restaurant critic’s first review
39 The Happy Pear twins: ‘It’s the first book we’ve done without topless shots’
40 Can Grafton Street stop the flood of closures?
Real news has value SUBSCRIBE