There There: Powerful debut examines life as a Native American 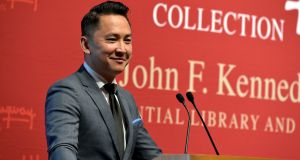 Tommy Orange: There There has been widely lauded for its depiction of Native Americans.

Towards the beginning of There There, Tommy Orange’s powerful debut, a character called Dene Oxendene appeals for funding for a film project. “[W]hat I want to do, is to document Indian stories in Oakland,” he proposes. “I want to put a camera in front of them, […][L]et them tell their stories […]with no direction or manipulation or agenda. […]I want to bring something new to the vision of the Native experience as it’s seen on the screen.”

As Dene delivers his pitch, it is easy to imagine that Orange, too, is laying out a manifesto for the book. “What we’ve seen is […]stereotypes” he tells us, whereas he wishes to depict what we haven’t seen – the “urban Indian story”, the “whole picture”.