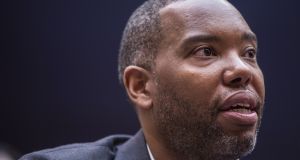 Ta-Nehisi Coates: his work has been compared that of Toni Morrison and James Baldwin.

In an interview on The Late Show with Stephen Colbert, Ta-Nehisi Coates revealed that The Water Dancer took a decade to write and “to get it right”. Already an award-winning journalist and recipient of the MacArthur Genius Grant, Coates made his name with the bestseller Between the World and Me (its title taken from a Richard Wright poem about a black man who becomes incapacitated with fear when he discovers the site of a lynching), and the essay collection We Were Eight Years in Power.

As a journalist, he found himself growing increasingly frustrated with interviewees ducking answers or insisting on the “truth” of something that was patently untrue, and so began to wonder if fiction could achieve what factual writing could not. Storytelling, he decided, had the power to go beyond myth. In correcting such faulty narration, he has neatly upended imagination and reality; in The Water Dancer’s magical other-history, fiction is being used to reassert, even to create, fact.

1 Miriam Lord: You cannot cocoon democracy – or can you?
2 ‘Everyone still thinks it’s a joke’ - parents of toddler with coronavirus speak out
3 Ireland has strategy to ‘break the chains’ of coronavirus - WHO’s Mike Ryan
4 Cheltenham faces criticism after racegoers suffer Covid-19 symptoms
5 Are holidays booked for July and August going to happen?
6 UK makes another coronavirus U-turn but doubts over strategy linger
7 Expect lockdown restrictions until September, says Dalata hotels chief
8 Cork men quarantined in Vietnam after St Patrick’s Day party
9 Central Bank warns of €22bn hole in public finances from coronavirus crisis
10 Coronavirus: 13 more deaths in Republic with 402 new cases confirmed
11 Coronavirus: Intensive care units ‘may be overrun’
12 Impact of Covid-19 on Travelling people: ‘Worst that ever came’
13 Coronavirus: Almost 100 staff and residents in one nursing home test positive, Dáil hears
14 Childcare workers laid off by employers who still had State subsidies
15 Netflix has revealed its most-watched content. You might be surprised
16 ‘It was absolute chaos, but we were able to find a sense of peace’
17 Varadkar: Decision next week on relaxing coronavirus restrictions
18 Stephen Collins: Second general election now a real possibility
19 The Wine Geese: Irish exiles who started new lives in French vineyards
20 Think you’re bad at video-conferencing? Boris Johnson is worse
21 International Booker Prize 2020 shortlist announced
22 Pandemic robs us of the power to gather and grieve
23 Irish family pay tribute to UK medic who died from Covid-19
24 ‘It’s Sinn Féin against the rest’: NI Executive in conflict over coronavirus
25 How fitness gurus stay healthy at home
26 Coronavirus: European solidarity sidelined as French interests take priority
27 Some protection equipment from China ‘not ideal’, HSE says
28 Coronavirus: Derry Girls share ‘isolation’ home video
29 Seanad election: Fianna Fáil’s Timmy Dooley and Fine Gael’s Catherine Noone eliminated
30 Fianna Fáil and Fine Gael close to agreeing coalition framework document
31 The chickpea stew that broke the internet in the US is here. Give it a go
32 ‘Dad began to slip away... but my sister could only join by Facetime’
33 No signs of lock-down fatigue in Ireland ... yet
34 Netflix: 10 of the best new shows and films to watch in April
35 A letter to Ireland from Italy: this is what we know about your future
36 Coronavirus: Should everybody be wearing masks to combat Covid-19?
37 Denis O’Brien may cede 49% of Digicel empire under debt write-down plan
38 Gardaí operating Covid-19 checkpoint seize €70,000 worth of heroin
39 Coronavirus: How to keep children happy, learning and entertained at home
40 Eurovision: Not even coronavirus can kill the camp
Real news has value SUBSCRIBE