The Upswing by Robert D Putnam: Charting social capital in US over 125 years

Book review: An ambitious and meticulously researched look at how the US can return to more altruistic version of early-20th century 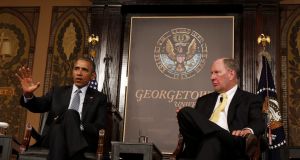 Celebrity social scientists are a rare species. Harvard professor Robert D Putnam described himself as an “obscure academic” until his scholarly paper on the decline of social capital in the United States was published in 1995. His elevation to celebrity status was confirmed when he was “invited to Camp David, lionised by talk-show hosts and pictured with his wife, Rosemary, on the pages of People”.

Putnam’s political guru credentials have since been recognised by, among others, former US presidents Bill Clinton, George W Bush and Barack Obama, and by our own former taoiseach, Bertie Ahern. His bestseller Bowling Alone, published in 2000, put on record the disappearance of social capital from the lives of American citizens. The proposition that ordinary citizens can create added social value from the raw material of their everyday relationships had never been so clearly expressed before. Social capital quickly became a panacea for all the ills of our times.

6 How did Ireland jump from low Covid base to world’s highest infection rate?

7 ‘A very nice baby with beautiful fair skin ... It was like they were selling a doll’

9 Mary’s story: Roscommon woman believed a lifetime of exile was as it should be

10 Luke O’Neill: Scientists have delivered against Covid-19. Now the politicians need to

13 Trump prepares to leave for Florida before Biden inauguration

17 Brexit red tape: ‘If nothing changes, Ireland will be closed’

23 Church ‘more complicit than most’ in mother & baby scandal - McAleese

24 Q&A: Covid-19 new variants in Ireland - everything you need to know

27 Maureen Gaffney: The land of the mother and baby homes

28 Is paying someone to clean your house the last word in middle-class privilege?

29 Infertility treatment: When will free IVF be introduced in Ireland?

30 Miriam Lord: Why did the secretary general cross the road? Because he’s worth it

32 No, you can’t use the bathroom, Jared and Ivanka tell their Secret Service agents

33 Netflix has spent millions on its films, so why are they so mediocre?

35 What is Ireland’s plan for vaccinating people against Covid-19?

39 TD calls for ‘serious scrutiny’ of Leave.EU group that relocated to Waterford

40 AIB plans ‘ethical’ sale of up to 650 distressed mortgages