The Supreme Court review: a legal first raises the bar

Ruadhán Mac Cormaic has plugged a gap with his compelling account of Ireland’s Supreme Court, which ranges across its history, daily workings and social impact 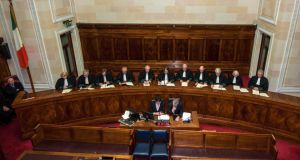 The Supreme Court is a strangely intimate room. Lawyers, litigants and others are often uncomfortably crowded together in the small, austere space. But despite the inauspicious setting this is the court in which, over 92 years, the most significant legal issues of the day have been decided, often with immensely serious political consequences. Supreme Court judges are among the most powerful figures in the country.

Yet, until now, there has been surprisingly little literature on the history of the court, its members, its daily workings or the broader social impact of its decisions. Many scholarly legal textbooks have analysed the development of its jurisprudence, but the story of the court itself has largely remained untold.

In this fine text Ruadhán Mac Cormaic has risen admirably to the challenge of telling that story. In a series of meticulously researched chapters he takes the reader through the court’s history, drawing on a range of sources, including interviews with judges, legal practitioners and academics. (I am one of those with whom he spoke.)

Commendably, he also talked with litigants – courageous individuals such as May McGee, who with her husband challenged the ban on importing contraceptives before the Supreme Court in 1973. In a landmark judgment the court ruled in their favour, declaring the existence of a previously unknown constitutional right to marital privacy and paving the way for the legalisation of contraception. May McGee told Mac Cormaic that she found the Four Courts “cold and scary . . . an awful place to be”, but she is proud of her part in arguably the most significant decision the court has ever made.

The McGee case was important not only in delivering progressive social change but also because it represented a high point for the doctrine of unenumerated rights. This doctrine asserts that judges may “read” rights (such as marital privacy) into the text of the Constitution, even where they are not directly specified. It is strongly associated with the tenure of Chief Justice Cearbhall Ó Dálaigh, in the 1960s, and with Mr Justice Brian Walsh and Mr Justice Seamus Henchy. More recently the doctrine has fallen out of favour. In 2001 the court ruled firmly against expansive interpretations of fundamental rights in the Sinnott and TD cases, both relating to the rights of children. In more recent cases, such as the Equality Authority’s unsuccessful challenge to the men-only membership rules of Portmarnock Golf Club, the court has confounded those who thought the judiciary might strengthen their conception of equality, or develop recognition of socioeconomic rights.

The court has also directly encroached on the separation of powers, for example in the 1986 Crotty judgment, which curtailed the power of the government to sign European treaties. And it has placed severe restrictions on the conduct of referendum campaigns in the McKenna and Coughlan cases, while denying Oireachtas members the capacity to conduct meaningful parliamentary inquiries in the Abbeylara case.

These decisions have contributed to the shaping of our basic democratic framework. For better or worse they have necessitated our heavy reliance upon direct rather than representative democracy – rule by referendum, not by parliament.

Such decisions have also caused real tensions between judiciary and executive. A certain tension is healthy in any functioning democracy; judges must be robustly independent, not unduly deferential, toward government. But at times tensions have reached crisis point. In 1999 Susan Denham, who is now Chief Justice, described the Sheedy affair, which led to the resignation of two judges and a registrar, as “the most serious constitutional crisis involving the judiciary since the foundation of the State”. Another crisis erupted more recently, during Alan Shatter’s tenure as minister for justice, when Mac Cormaic reveals sensationally that the late Mr Justice Adrian Hardiman threatened to resign over the judges’ pay controversy – a matter ultimately settled by referendum.

Relations between government and the court have improved since 2014, but outstanding issues remain to be resolved around introduction of the long-promised judicial council and reform of the judicial appointments process. Although this process is highly politicised, a recent Dublin City University study found no evidence that judges’ political backgrounds affect their decisionmaking. As Mac Cormaic shows, the converse may apply; often, judges with prior political affiliation have effectively turned against their party in government, delivering strong judgments against the State. Allegiances are not predictable, nor should they be.

Similarly, while we may speak of particular judges as liberal or conservative, the truth is more nuanced. The former chief justice Thomas O’Higgins, widely regarded as deeply socially conservative, gave a majority judgment in the 1984 Norris case upholding the criminal ban on homosexuality that Mac Cormaic accurately describes as “poorly reasoned, virtually devoid of human empathy” – the worst Supreme Court judgment ever. Yet the same judge strongly supported the rights of defendants in criminal trials and years later said that he personally favoured decriminalisation of homosexuality.

Mac Cormaic provides great insights like these into individual judicial personalities. He may take journalistic liberties at times in imagining judges’ innermost thoughts, but some insights derive from a unique source: previously unpublished correspondence between Walsh, who served from 1961 to 1990 and is credited with having developed fundamental rights case law, and his American contemporary William Brennan, of the US supreme court. The excerpts from their warmly informal letters provide a new perspective on the court’s work over that period.

Mac Cormaic concludes with a fitting tribute to Hardiman, in an afterword written on his sudden death, in March of this year. This sad event effectively marked the end of an era for the court, which has changed beyond recognition from its incarnation as a three-man institution in 1924. Four of the nine judges are now women, including its highly respected Chief Justice; a new court of appeal has been introduced to change the nature of its workload.

Any author taking on the task of writing about the court over coming years will have a very different story to tell. There is clearly more to be written, in particular, about the court’s relationship with the two European courts whose decisions directly affect our own jurisprudence but which are not extensively referenced here. The effects of recent significant judgments, such as the 2015 JC case, in which a core criminal-evidential rule was overturned, also deserve more substantial discussion. For now, however, this book makes compelling reading for all those with an interest in law, history or politics. Lawyers and nonlawyers alike will find this a remarkable story, told with great style. A challenge well met.