The road to Vroom-Town: a children’s series aiming to sell by the truckload

Working for a truck dealership made Emer Conlon realise how fascinated children were by big, noisy vehicles and inspired her to create a series of books. Next stop Hollywood! 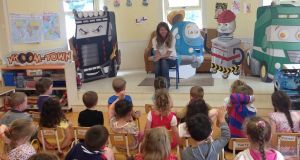 October was Children’s Book Festival month and I did 26 storytimes in libraries throughout the country. We also did a Summer Library Tour and received wonderful feedback from children, parents and library staff alike Emer Conlon: I witnessed children coming into the yard with their dads who were purchasing trucks and parts. Their eyes lit up when they saw the enormous, intriguing and, to them, magically noisy trucks! 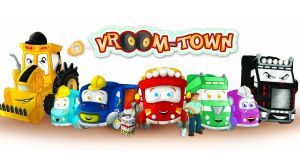 Vroom-Town is a wonderful place where trucks with all types of personalities live, work, play and have exciting adventures. Its residents include Screech, BullyDozer, Nozzle (Noz to his friends), Tim the Tipper, Sparkle and Terrible Terry

My journey to Vroom-Town began almost six years ago while working at my “real” job as marketing manager in McElvaney Motors, a Scania truck dealership in Monaghan for the north-east and Dublin. I witnessed children coming into the yard with their dads who were purchasing trucks, parts, etc. Their eyes lit up when they saw the enormous, intriguing and, to them, magically noisy trucks! So technically the inspiration for the Vroom-Town books was literally staring me in the face on a daily basis.

Remarkably through further investigation, there were no children’s books with characters about trucks. Thomas the Tank Engine covered the trains interest and then we had Cars and Planes (my idea was prior to the latter two) but I felt there was definitely something missing in terms of stories about trucks. My imagination went into overdrive and I started on the difficult, bumpy and relentless road trying to create a new phenomenon in the world of children’s literature!

Vroom-Town is a wonderful place where trucks with all types of personalities live, work, play and have exciting adventures. Its residents include Screech, BullyDozer, Nozzle (Noz to his friends), Tim the Tipper, Sparkle, Terrible Terry and many more, just waiting to tell their stories and for children to fall in love with them. There are three published books in the series, with another 10 written and titles for 70 more. The first two books are also available as Gaeilge. All can be purchased in bookstores (including Eason) throughout Ireland, the US and even Lanzarote. They are ideal for children aged 3-7. Here is a sneak preview.

Although Vroom-Town is a story for children, it goes a bit deeper too in terms of education and touches on social issues like bullying (and identifying same) as well as the importance of friendship. For example, there is a moral in every story – each book is about good winning over evil (and so it should) and illustrates that there are consequences for actions. In fact, normally the baddies end up on the “Naughty Pit”!

Vroom-Town has a very interactive website: http://vroom-town.ie/index.php/en/ (there is also an as Gaeilge version). Children can play games, solve creative puzzles, jigsaws, enjoy some colouring and generally have fun. These days, children are using their parents’ iPhones and laptops before they can walk or talk so it is important to have an online aspect to add another dimension and keep their interest. It is better that children play online games that pertain to books rather than just random games as it will encourage them to read. Children can also become members of the website (Vroomers).

The books have had quite a bit of publicity since they were launched. They were favourably reviewed by Robert Dunbar. I was also on national TV and radio (including RTE’s Nationwide).

All five books for the Irish market have been printed in Ireland and everything pertaining to the books and website are from Irish suppliers, supporting Irish jobs.

I realised quite early on that volume sales are key to success in this industry and indeed retail in general. It was time to focus on getting Vroom-Town on a global stage and America is a route to that market. So I began trying tirelessly to get Vroom-Town noticed in America. It worked – I secured a contract with a book distributor in New York. To date, the first two Vroom-Town books, The Adventure of Tim the Tipper in Quentin’s Quarry and The Adventure of Terry the Terrible Tractor Unit Causing Chaos have been launched over there.

When in New York for the launch of the books, I met a global children’s TV distributor and TV channel to discuss the potential of Vroom-Town as an animated series – watch this space!

October was Children’s Book Festival month and I did 26 storytimes in libraries throughout the country. We also did a Summer Library Tour and received wonderful feedback from children, parents and library staff alike.

The self-publishing journey is not easy. For example, a self-published author needs to not only write the book, but to organise basics such as obtain a barcode, organise illustrations, decide paper style, font, layout, book size, whether to print on spine, ascertain the industry standards for content of acknowledgements page, etc. All of the aforementioned pertain only to the physical book. Then they must get the book on the shelves and not only that, but tell the population that the books exist and convince people to purchase their books over the other thousands of books on the shelf!

However, with all that said and having encountered more red lights than green, a lot of cul de sacs and numerous road blocks, potholes the size Cavan wouldn’t even see, I continue to find a way through to making Vroom-Town the next big thing in the global children’s market. We have sold more than 4,000 books to date and continue to gain traction. My destination for the Vroom-Town journey is to sell millions of Vroom-Town books, to help encourage children all over the world to read, have a Vroom-Town cartoon series on a global network and have Vroom-Town: The Movie showing in cinemas! Yes, big goals – however, two years ago, so too was my aim of getting my first book on every shelf in every bookshop in Ireland!! So watch this space...

I believe children who love trucks, diggers and a good story with great characters, will love Vroom-Town. The power of early reading for children is immense and can literally shape their path in life – it should not be dismissed or over-looked. It is an arduous journey that self-published authors must endure when striving for success in the world of literature (for me, 15- and 16-hour days are the norm)! However, if just one child was intrigued enough to pick up the Vroom-Town books and develop an interest in reading as a result, then I have been successful.