The return of Susanna Moore’s shocking and disturbing cult classic 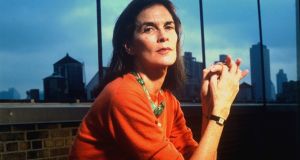 Susanna Moore’s In The Cut (W&N, £12.99) was first published in 1995, and the blend of unusual sexual frankness, pervasive misogyny and excruciating violence that helped make it a transgressive cult classic has lost none of its power to disturb; if anything, the reissue of this taut, controlled tale of the pleasures and perils of a smart, reckless woman in a city full of predatory men is even more on point.

Frannie lives in the West Village and teaches creative writing; one night in a bar to which she has unwisely brought a male student (who is having trouble with irony), she stumbles on a red-headed woman giving oral sex to a man with a tattoo on his left wrist; the man sees Frannie’s face but she doesn’t see his; she watches until he comes, comparing her technique to the redhead’s. When the woman is found with “her throat cut and her arms and legs pulled from their sockets” and the police come calling, Frannie finds herself strongly attracted to Det James Malloy and they begin a sexual relationship despite, or because of, the tattoo on his left wrist.

1 Child (4) died of viral infection following nap at Cork creche
2 Asylum claims by Georgians and Albanians brought to abrupt halt
3 Miriam Lord: Does anyone care if Leo smoked or snorted?
4 Fresh delays and millions in extra costs for children’s hospital revealed
5 Housing crisis: Seven solutions to Ireland’s biggest problem
6 Hilary Fannin: What I wish my spouse and I had done the morning of our wedding
7 Owen Doyle: Creeping professionalism of schools rugby a threat to the game
8 Cosgrave should give his speech to Web Summit’s partners in Saudi Arabia
9 Fintan O’Toole: Historians will not believe sheer ignorance of Brexit supporters
10 Ryanair wants Irish courts to block Skyscanner from selling its flights
11 A vegetarian and a non-drinker visit Ireland: here’s their verdict
12 Ireland on alert as suspected case of coronavirus treated in Belfast
13 Paschal’s election pitch is based on the economy, Brexit and Project Ireland 2040
14 Facebook ‘looking into’ link between Irish website and firm that breached privacy laws
15 Election 2020: FG and FF manifestos to promise billions in spending
16 Election proposals may make the housing crisis worse
17 China coronavirus death toll reaches 26 as cities locked down
18 Caroline Wozniacki’s career ends with defeat to Ons Jabeur
19 Cycling or swimming, walking or yoga: What is the best exercise for you?
20 Niall Quinn happy to step into the breach at FAI
21 Rugby under threat; Niall Quinn steps into FAI breach
22 Dolores O’Riordan’s former Howth home for €1.395m
23 Stephen Collins: Varadkar and Martin’s jobs are both on the line
24 Rural Ireland’s uncertain future in focus as Denis Naughten hits campaign trail
25 Scotland’s Finn Russell missed training after Sunday drinking session
26 Star Trek: Picard review – Patrick Stewart has never been better
27 Woman loses appeal over sale of family home in Co Westmeath
28 The Turning: This film is a total waste of time. Don’t even read the review
29 Court dismisses part of action over claim of ‘catastrophic losses’ on pension schemes
30 Pension case study: ‘I found it very humiliating. Horrible’
31 Teen arrested by gardaí investigating Cameron Blair murder
32 Man tested for symptoms linked to coronavirus in Belfast
33 Seven ways to make your home more energy efficient
34 52 places to go in 2020: Here’s where the New York Times says you should visit
35 Britain’s strategy causes confusion ahead of next phase of EU talks
36 Rob Doyle: ‘Frankly, a lot of my life has been disastrous’
37 GAA officials and referees brace themselves as new rules kick in, and this time it's for real
38 Call for improved rent collection as 61% of Dublin council tenants in arrears
39 Who are Ireland’s 17 billionaires?
40 MEPs reject Central Bank’s Gerry Cross for key banking role
Real news has value SUBSCRIBE