The return of Edward Cullen, vampire and emotional abuser

Stephenie Meyer’s Midnight Sun is 756 pages long, and it feels every bit of it 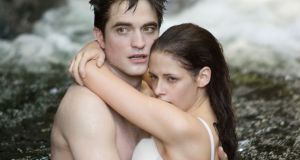 Fifteen years after first introducing the world to brooding vampire Edward Cullen, Stephenie Meyer revisits the story of Twilight from his perspective. Fans have been waiting for the already-bestselling Midnight Sun (Atom, £14.99) for almost as long, being disappointed when Meyer set the project aside in 2008 after early chapters were leaked online.

When you love a franchise, part of the joy in any new material is simply that you get to spend more time in that universe, and that’s really all readers will get here. It’s thin on new insights, revisiting the original book scene by scene, with added inner turmoil. “I was a predator. She was my prey,” Edward thinks, imagining killing Bella Swan – which might make for a suspenseful read if we didn’t already know the story. He declares himself to be a “nightmare, destroyer of lives, mutilator of dreams”, but it sounds theatrical rather than genuine.

6 Cavan priest will not be ‘dictated to by pagan government’

10 Exiting Level 5: What will be allowed from December 1st?

11 Some 5,300 people waiting over two years for Irish citizenship application to be processed

14 Restaurants bookings surge before reopening with ‘busiest December’ ahead

15 The Offload: Shane Horgan pulls no punches as the podcast wars rage on

18 Man (30s) charged with murder of woman and two children

24 ‘They’re not making any more land, so it will be valuable’

26 Government may yet face hardest call on Covid-19 restrictions

30 Saving the State: intimate if flattering inside story of Fine Gael

32 Restrictions on nursing home visits will ease from next week

38 Life under Level 3: What stays open and where can I travel?