The O’Rahilly by Aodogán O’Rahilly review: portrait of father as 1916 hero

Manchán Magan, great-grand nephew of The O’Rahilly, on a son’s biography of the man who tried to stop the Rising but became the only rebel leader to be killed in action 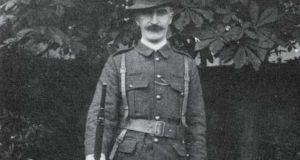 The O’Rahilly: with a life of opulence and indulgence before him, he chose instead to turn his back on privilege, selling his yacht and race horse to devote himself to the ideal of political freedom and the creation of a nation with integrity and vision 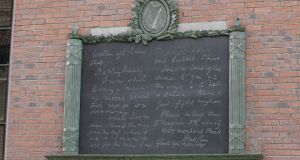 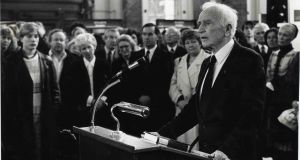 Aodogán O’Rahilly speaking at a reception to mark the publication of his book, Winding the Clock – O’Rahilly and the 1916 Rising, which has now been resissued, in the GPO, O’Connell Street, Dublin

Book Title:
The O’Rahilly, A Secret History of the Rebellion of 1916

Whether history and hindsight eventually elevates the Easter Rising to heroism or relegates it to a bout of histrionics we will, hopefully, remain curious about its principal instigators – those men and women whose names endure in the titles of streets, hospitals and train stations.

Michael O’Rahilly, the subject of Lilliput Press’ new biography, is but one of them, yet he stands out even among the panoply of burnished Irish revolutionary leaders – most of whom have been appended with attributes more fitting to the dashing leading character of a romantic novel: the lovelorn son of a papal count, dying of tuberculosis; the shy school teacher with theatrical ambitions; the wily old prison-hardened Fenian who signs up for one last job with his innocent young protégé, a polio-blighted cripple with a valiant heart.

Amongst these various caricatures who all managed to find their heart and soul on the Yellow Brick Road towards rebellion, Michael Joseph O’Rahilly is a curious anomaly – the only leader, aside from Roger Casement, who desperately did not want the Easter Rising to happen and who actively tried to prevent it… and yet then, with glorious irony, ends up being the single senior officer killed in action during the fray.

In the Marvel comics version O’Rahilly would be the gallant Professor Charles Xavier character in X-Men: Easter Rising – a debonair, dashingly-dressed, knightly figure who was also a visionary inventor, an affluent anti-capitalist, a skilled furniture-maker, a successful newspaper editor, an able graphic designer and an accomplished tenor renowned for his recitations at the most distinguished social gatherings.

With a life of opulence and indulgence before him, he chose instead to turn his back on privilege, selling his yacht and race horse to devote himself to the ideal of political freedom and the creation of a nation with integrity and vision. He went about the mission with the same vigour he had previously worked the stock exchange, promoted the aviation industry and ran a woollen mill in Philadelphia. He immersed himself first of all in the intricacies of British military strategies, so that he might beat them at their own game, and then went to Europe to buy up as many guns as he could afford and had them smuggled to Ireland.

It’s a heady story and is well captured by Michael’s second surviving son, Aodogán O’Rahilly, in The O’Rahilly, A Secret History of the Rebellion of 1916, which is part biography, part paean to a beloved father, and was in fact originally published as Winding the Clock: O’Rahilly and the 1916 Rising by Lilliput Press in 1991.

There is no doubting the meticulously research behind it: Aodogán spent two decades, consulting every library and archive that he could arrange access to in the 1970s and ’80s. His notes in The O’Rahilly Papers at UCD Archives reveal the many valuable first-person accounts he brought to light. Yet, Aodogán was 11 when his father died and for the rest of his life he remained enchanted by his martyred father; as a result there is a tendency in the book to position The O’Rahilly centre stage in every scene. He presents a convincing case for Michael O’Rahilly as the singular key figure in the formation of the Volunteers and the subsequent lead-up to the Rising, and while this is not entirely inaccurate, the tight focus on a particular individual does skew reality a bit. Other events and people are sidelined. There’s a tendency at times to gild the lily and to romanticise, with family anecdotes being given equal status with documentary evidence, but this just adds to the readability of the work.

No matter what your perspective, the fact that a tiny group of Irish oddballs took on the pan-global might of the British Empire in Easter 1916 is an intriguing incident. It was a ridiculous, valiant, visionary and thick-headed act or, as O’Rahilly told Countess Markievicz on Easter Monday, “It is madness, but it is a glorious madness.”

The search for identity and meaning that led to that moment is as relevant to us today as it was then, and in so far as this book casts light on an individual who regarded Irish culture and heritage as a palpable, living entity worth sacrificing everything for it has an urgency beyond most history books. By declaring that the Easter Rising should not proceed and actively trying to prevent it, The O’Rahilly cast himself on the wrong side of history and was eclipsed for a century. Perhaps this re-issue of Aodogán’s book may redress the balance.

Manchán Magan is the great-grand nephew of the O’Rahilly

Has your phone secretly recorded your conversations? Mine has
Real news has value SUBSCRIBE