The Nine Hundred: an account of the hell Slovakian girls faced inside Auschwitz 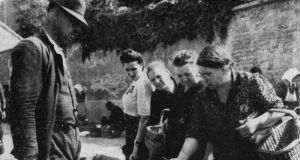 A Jewish woman wearing a badge with a capital Z (zidovsk for Jewish) under the Nazi regime in Slovakia in 1939. Photograph: Keystone/Hulton Archive/Getty Images

The announcement that was to seal the fate of hundreds of Jewish girls across Slovakia was made in a blizzard in 1942. Town criers braved the brutal weather to declare in public squares that unmarried Jewish women aged between 16 and 36 were to sign up to three months of “government service”.

Slovakia by that point in the second World War was a Nazi satellite state that had only become independent in 1939 under German protection. Anti-semitism in the young country had been ratcheting up for years. By 1942 Jews were living under stringent codes that forbade them from attending high school, gathering in groups, travelling without permission and even owning pets.

1 Drug dealer loses codes for €53.6m bitcoin accounts
2 ‘IRA has gone away’: McDonald responds to Garda Commissioner’s comments
3 A Dad with brain cancer: I was given 18 months to live, it put things into perspective
4 Jogger injured by galloping horse could face substantial legal bill
5 Courts Service gets orders over social media postings about elderly woman
6 Knock gets visit from world’s largest passenger plane
7 More than 25 people to sue over circulation of images taken at Dublin Garda station
8 Ben Affleck: ‘It took me a long time to admit I am an alcoholic’
9 Who turned up to the Dublin casting call seeking ‘bone thin, amputees, crooked teeth’?
10 Man stalked woman for weeks before climbing into flat armed with hammer
11 Steve Coogan says ‘my Irish passport will be arriving shortly’
12 Varadkar says any Fine Gael deal would have to recognise strength of its vote
13 Stephen Collins: Reluctance of Fine Gael and Fianna Fáil to govern understandable
14 ‘Manchester United are lucky to have you’: Klopp responds to Donegal schoolboy’s letter
15 The close links between Sinn Féin and IRA untangled
16 Politician’s son avoids jail for lighting firework in Copper Face Jacks
17 MV Alta: The unmanned voyage of the Ballycotton ‘ghost ship’
18 ‘How can we torment a bunch of millennial snowflakes and get away with it?’
19 L’Ecrivain, Derry Clarke’s Michelin-starred Dublin restaurant, to close after 31 years
20 Woman found living in squalor with flies coming from blanket she was using
21 Chance encounter with gardaí unmasked bitcoin millionaire drug dealer
22 Iain Henderson ruled out of Ireland’s Twickenham visit
23 Derry Girls’ blackboard goes on display as a museum piece
24 Man who crashed stolen bicycle into English tourist jailed for eight years
25 Men with catapults to protect Trumps from monkeys at Taj Mahal
26 Serving fireman charged with possessing cocaine at Tipperary fire station
27 United greats in attendance as club hero Gregg laid to rest
28 Creche owner where girls allegedly assaulted had wanted ‘male role model’ for children
29 Student reaction to rent hikes ‘emotional’, says UCD president
30 A maverick taking on the Irish whiskey establishment
31 Why Sweden ditched its negative rate experiment
32 Six Nations: Ireland v England all you need to know guide
33 Will Avolon find itself on the block as China prepares to seize troubled parent HNA?
34 Irish cultural exports helped pave the way for economic growth
35 Paraic O’Donnell: MS is meticulously destroying me. I am being unmade
36 T-Mobile and Sprint strike new deal terms
37 Super central D4 mews returns with €180k price hike
38 Dot Cotton actor June Brown leaves Eastenders after 35 years
39 Person claiming to represent ‘ghost ship’ owner comes forward
40 How do you know if you are wealthy? It’s not straightforward
Real news has value SUBSCRIBE