The Next Great Migration: A bracing look at racial hierarchies

Book review: Sonia Shah convincingly argues that categorising humans prevents us from seeing people of all colours as, basically, the same 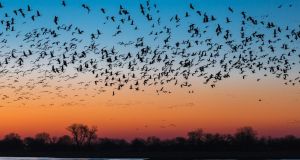 The Next Great Migration: At its core this book is a dismissal of spurious categorisation, and the use of categories to keep things in their place, whether geographically, politically or in any other sense.

Sonia Shah and her publishers cannot have anticipated that this book would emerge at such an apposite time. Written in the context of a decade of growing political tension surrounding migration in both Europe and the US, it has been released at the precise moment when so many of us are questioning the morality of racial categorisation and how it is used to oppress.

The Next Great Migration is a bracing book. At its core is a dismissal of spurious categorisation, and the use of categories to keep things in their place, whether geographically, politically or in any other sense. She deconstructs the idea that particular flora and fauna belong only in specific settings and that their movement is somehow aberrant or unnatural. In fact, living things – understood in the broadest sense – have been moving forever.

1 Covid-19 in Ireland: Colour-coded response set to replace phases
2 Donald Trump immediately targets Kamala Harris in campaign video
3 Moving in and out of lockdown is a recipe for economic disaster
4 New Zealand considers freight as possible source of new Covid-19 cluster
5 Ireland among countries urged to consider reinstating Covid-19 restrictions
6 Brianna Parkins: My other half is trying to get me excited about spending a summer in Ireland
7 Sunny spells forecast with high temperatures of 26 degrees
8 Michael McDowell: Free the Shelbourne Four from ‘woke’ activism
9 ‘I’m afraid an intimate photo may be used to blackmail me or be sold to a porn site’
10 Madigan’s primary goal is Ireland caps after switch to Ulster
11 ‘I’ve been sleeping with my girlfriend’s sister. I need help. What do I do?’
12 AIB concedes Covid mortgage policy was ‘regrettable’
13 Standoff ensues over Minister’s unavailability at Covid committee
14 An Garda Síochána criticised for Irish-language law non-compliance
15 Kamala Harris an assured performer but past record faces scrutiny
16 Seán Moran: It won’t take much before cancelling All-Ireland looks like a solution
17 Lowest numbers in two weeks as one more Covid-19 related death and 35 new cases reported
18 Seat’s new Leon: It’s now better than the VW Golf it’s based on
19 Let us pursue the coronavirus - not just watch its R number wax and wane
20 A new species of dinosaur discovered on the Isle of Wight
21 Covid-19 testing under scrutiny after meat factories and creche affected
22 Dwayne Johnson hangs on to title of highest-paid male actor
23 Objectors stall production of enough timber for 1,000 houses
24 My sporting disappointment: Battered, bloodied, broken by The Wall
25 British economy slumps into recession after record drop in quarterly output
26 KBC Ireland chief feels heat from big tech in race for relevance
27 Harvey Norman targets Irish property developers
28 Russia set to begin Covid-19 vaccinations within weeks
29 Joe Biden names Kamala Harris as running mate for US election
30 The Irish Times view on resurgence of Covid-19 in Europe: adapting to the new normal
31 Revised help-to-buy scheme opens for applications
32 Irish Michelin two-star restaurant to sell kebabs and fries from takeaway trailer
33 KBC Ireland open to selling legacy problem mortgages
34 Majority of parents believe children now face mix of classroom and home schooling
35 Covid-19: The fallout for families has been immeasurable
36 Glanbia sees sharp decline in profits due to Covid-19 crisis
37 Maura Higgins: ‘I really hated it. Apart from that massage, the rest of it can kiss my ass’
38 Brutalist beauty in Brittas for €495k
39 Wider Covid-19 testing aims to reach 60,000 people a week
40 Transferring the family farm without a tax headache
Real news has value SUBSCRIBE