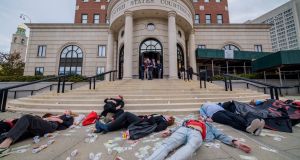 In his traducement of norms, Donald Trump invites us to view him as an aberration. And there’s succour in this: the prospect of restored decorum after the orange comet sputters. But what if Trump is endogenous to America’s political system – a “rational actor” observing “the logic of polarisation?” This is altogether more inculpatory, not to mention disconcerting – waylaid by his ego, Trump has proved a poor demagogue; what if a competent one comes along?

“We collapse systemic problems into personalised narratives, and… cloud… understanding,” writes Vox co-founder Ezra Klein. In Why We’re Polarized he applies “systems thinking” to a US political firmament that selects for divisiveness. The result is riveting, revelatory, but also slippery – a specimen of the malaise it diagnoses.

1 Coronavirus: President Higgins message to be broadcast on local radio stations
2 Expect lockdown restrictions until September, says Dalata hotels chief
3 Are holidays booked for July and August going to happen?
4 Coronavirus: Should everybody be wearing masks to combat Covid-19?
5 Coronavirus: Trump’s tone changes as US faces brutal loss of life
6 Patrick Honohan: Preparing for post-pandemic financial reckoning
7 ‘Everyone still thinks it’s a joke’ - parents of toddler with coronavirus speak out
8 Amy Huberman’s Isolation Diary: ‘We’re finding things for Brian to paint’
9 Think you’re bad at video-conferencing? Boris Johnson is worse
10 FF-FG government would look to avoid return to austerity
11 Coronavirus: Westmeath has highest rate of Covid-19 outside of Dublin
12 Don’t let your short-term crutch become a long-term drink problem
13 O’Brien may cede 49% of Digicel empire under debt write-down plan
14 ‘It’s Sinn Féin against the rest’: NI Executive in conflict over coronavirus
15 Miriam Lord: When did we in our wildest dreams envisage a field hospital in Saggart?
16 Netflix: 10 of the best new shows and films to watch in April
17 Time to spare? Eight DIY jobs you can do today
18 Newton Emerson: Stormont must agree to disagree for powersharing to survive crisis
19 Poor showing for women in Seanad elections as Varadkar’s plea ignored
20 Coronavirus: how hard has Ireland’s economy been hit by pandemic?
21 KPMG fined £700,00 for failing to challenge client
22 Coronavirus in Ireland: New powers of arrest for gardaí expected to come into force
23 Childcare workers laid off by employers who still had State subsidies
24 Dublin estate agent offers free accommodation to hospital workers
25 Tourism chiefs devising plan for The Gathering part 2 to reboot sector
26 Ireland’s pharma industry gears up to make key ingredient for Covid-19 testing
27 Record 300,000 jump in unemployment expected
28 A letter to Ireland from Italy: this is what we know about your future
29 International Space Station visible again in Irish skies tonight
30 AIB offers SMEs breathing space on fees
31 Almost 90% of applicants receive Covid-19 unemployment payment
32 Coronavirus: At least 750 home carers to be redeployed to nursing homes
33 John Boyne’s children’s short story competition: Read the winning entries
34 A pandemic and those on the margins
35 Coronavirus presents opportunity for Beijing to usher in Chinese century
36 Little Women scene stolen by water bottles spotted in background
37 The Wine Geese: Irish exiles who started new lives in French vineyards
38 ‘Dad began to slip away... but my sister could only join by Facetime’
39 Ten women who attended Dublin maternity hospital tested positive for coronavirus
40 Coronavirus: Republic reports 14 further deaths and 212 new cases
Real news has value SUBSCRIBE