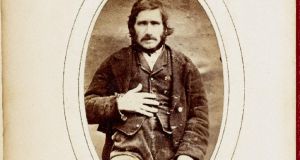 Maolra Seoighe (“Myles Joyce”): the Irish-speaker wrongly executed for the 1882 Maamtrasna murders after a trial conducted entirely in English.

“To steal his language from a man in the very name of language,” wrote Roland Barthes, “every legal murder begins here.” The story of Maolra Seoighe (“Myles Joyce”), the Irish-speaker wrongly executed for the 1882 Maamtrasna murders after a trial conducted entirely in English, is one of the most notorious injustices in our legal history, the subject of an unprecedented pardon from President Michael D Higgins this year. Seoighe had protested his innocence to the last, desperately asking why he should be killed – “Cia’n fá mé chur ann báis?” – even as the hangman put the noose around his neck. “I couldn’t understand a word of his lingo,” recalled the executioner. It was a scene, wrote TP O’Connor, “that will live in Irish memory until the end of time”.

In her powerful and meticulous new history of the murders and their aftermaths, Margaret Kelleher illuminates not just a series of tragedies, but also the bilingual Ireland often forgotten in our narrative of language change, a messy world of two tongues where the foreign gradually became familiar in Irish mouths and minds.

1 Exiting Level 5: Ministers to push for reopening of shops, restaurants and churches next week
2 Donald Trump directs team to co-operate on Biden transition
3 Alison Curtis: My guilt at not going for a second pregnancy
4 How to gift your child a house deposit . . . tax free
5 Covid-19: Hairdressers, gyms and religious services could return next week
6 BOI customers to be charged twice with bank fees on New Year’s Eve
7 ‘Shock and dismay’ as barristers asked to repay Government Covid grants
8 Gerry Thornley: Ireland don’t want to box themselves into a corner
9 Fintan O’Toole: Our Government should be a fox. It is actually a snake
10 Patrick Freyne on Christmas ads: ‘No one belongs on the naughty list.’ This should be big news
11 Mentally ill prisoner found naked on floor of solitary confinement cell
12 The beginning of the end: 10 things to know about Covid-19 vaccines
13 Kevin McStay: Maybe a knockout All-Ireland Championship is the long-term solution?
14 Brexit: Negotiators will work hard to avoid sausage ban, says Minister
15 400 – yes, 400! – Irish retailers for all your online Christmas shopping
16 ‘Shatter the glass ceiling’: First woman university chief in Ireland after 428 years
17 Operator rejects claims by Dr Tony Holohan that car parks are full
18 Owen Doyle: Ireland suffered from officiating of the breakdown
19 Irish designer of Oxford vaccine: ‘I’ve never worked so hard in my life’
20 Son putting elderly dad under pressure to sign over land
21 Workers have little idea of the cost of retirement income
22 Somebody needs to explain sovereignty to Johnson before it is too late
23 O’Flynn and BlackRock to double money with €100m sale of former HP campus
24 Digital bank N26 targets one million customers in the Republic
25 Co-living in the Liberties: Rapidly changing urban fabric proves divisive
26 Covid-19: Level 5 restrictions likely to be eased in two stages, as planning to roll-out vaccine begins
27 An Taisce seeks to overturn permission for Co Kilkenny cheese plant
28 Orangeman was asked if he wanted Irish flag removed from Dublin Castle
29 CRH predicts €800m charge this year related to Covid and Brexit
30 We continue to ignore massive pensions elephant in the room
31 Many exalted western values rooted in Christian tradition
32 Covid brings home dangers of domestic violence this Christmas
33 Covid-19: ‘Off-the-charts’ lobbying from sectors as Government plots lockdown easing
34 Donna Hay’s quick and simple one-pan stand-by dinner
35 The gift of an Irish children’s book for a difficult Christmas
36 Elon Musk unseats Bill Gates as world’s second-richest person
37 Dublin’s monopoly an increasingly difficult problem for Leinster Council
38 The ice-cream maker who was diagnosed with diabetes
39 Boeing seeks dismissal of Norwegian Air’s €1bn lawsuit over Max aircraft
40 Jennifer O’Connell: Dryrobe culture wars a symbol of change
Real news has value SUBSCRIBE