The lost Protestants of ‘Kingstown’

Many Protestants felt unable to live in independent Ireland. Author Julie Parsons tracks down some of the families who left 20th-century Dún Laoghaire 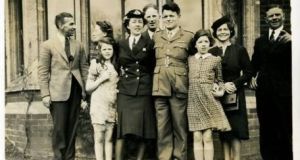 Elizabeth and Andy Parsons, parents of Julie Parsons, on their wedding day in 1945.

I was born in New Zealand in 1951, the child of Irish emigrants. My mother was always homesick. She longed for Ireland. Circumstances meant that she spent many years away from home but, as soon as she could, she returned to Dún Laoghaire where she had spent her childhood. She brought her children with her. We were aged from 17 to nine. I was the 12-year-old in the middle.

My mother had always told us we were Irish. But the Ireland we returned to in May 1963 was not the Ireland of her experience and her memory. Her Ireland was a Protestant world; her father was the rector of the Mariners’ Church in what she still called “Kingstown”.

6 Mairead McGuinness: They don’t call me ‘Elbows McGuinness’ to my face

7 Stabbed teenager with ‘beautiful soul’ had ‘bright career ahead’

8 Covid-19: International travel may not be possible by Christmas – Varadkar

10 Restrictions may be eased to Level 4 after March 5th, Varadkar says

13 Mayo's Clare Island one of State’s most infected communities

14 Q&A: Can I still pass Covid on after I’ve been vaccinated?

15 GameStop focus of war between Wall St and small investors

17 Tributes to Dublin doctor who died with Covid-19

22 We must ask obvious question over shooting of George Nkencho

25 Emma Dabiri: George Nkencho’s death ‘brought me back to the Ireland I grew up in’

27 The chickpea stew that broke the internet in the US is here. Give it a go

28 Range Rover Sport D350: Fab to drive. But everyone you pass will hate you

29 Sharp increase in the number of Covid-19 family outbreaks

33 The Holocaust: How to say ‘never again’ and mean it

34 Millionaire couple travel to get vaccine intended for indigenous Canadians

40 If the vaccines row wasn’t real, Boris Johnson would have to invent it