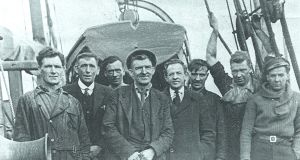 The crew of the Cymric here in dry dock before sailing. The man third on the left is Michael Tierney, the neighbour who encouraged Dermot Bolger’s father to go to sea. Photograph: from Frank Forde’s book The Long Watch, courtesy of New Island 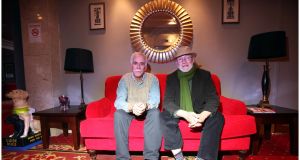 Dermot Bolger is a writer not easily categorised, because he has published extensively across genres. He has also played an important role in the history of the small Irish press – first with the establishment of Raven Arts in 1977, and then with New Island, the publisher of his latest work. Impressive as these achievements are, it doesn’t always do for a writer to defy or escape neat categories, because these usually provide the foundation for a reputation. Diffusion of talent can be confused with authorial dabbling or lack of focus.

In his three decades of writing, Bolger has defied the odds to critical acclaim both here and abroad. He is best known to Irish readers as the author of working-class Dublin fiction, but his novels display a broader range than that suggests. Fetishism, criminality, the precarious features of immigrant and emigrant labour and life – it’s all there, interspersed with touching vignettes of young love.

The Lonely Sea and Sky takes its title from the first line of John Masefield’s much-loved poem Sea Fever. The book covers territory new for Bolger, as it is based on incidents from his father’s life as a merchant sailor out of Wexford. Most of its action takes place outside Ireland, either aboard ship or in foreign ports from Cardiff to Lisbon. More than 100 pages in the midsection are given over to a detailed account of Christmas Eve and Day, 1943, in the Portuguese capital.

This gripping yarn (and when is a yarn not gripping?) unspools as 14-year-old Jack Roche, eldest son of a widowed mother, successfully finagles his way into a job as cabin boy on the MV Kerlogue. Glancing back as Wexford’s jumble of medieval streets recedes and Christmas nears, Jack is following in the footsteps of his seafaring father and grandfather. Still very much a child, he is both terrified and elated to be leaving home for the first time.

Bolger gradually fills in the cast of characters Jack comes to know and admire in the intimate world of a vessel described, rather anachronistically, “as long as ten Model T Fords”. There is the dodgy Mossy Tierney, who has promised to act as paterfamilias to young Roche; the terminally ill second mate, Mr Walton; the benign Capt Donovan; and the solitary and silent old salt, Myles Foley.

Much is made of the camaraderie and strong bonds of loyalty among seamen, and, with its emphasis on the long-standing traditions of seafarers, there is a timeless character to the narrative.

Indeed, the chosen diction is, at times, older than its 1940s setting warrants. Bolger’s exposition of historical details about concentration camps and the workings of the Salazar government can occasionally stretch to include information not readily available to Irish seamen at the time, no matter how perceptive they might be.

It’s Jack’s adventure we care most about in a story that includes many familiar elements of the coming-of-age novel. But this is not merely another tale of an innocent abroad , and some of the subtler traits of Bolger’s writing carry the reader beyond its anomalies. The Lonely Sea and Sky stands as a war novel with insight into the era and its realities in two very different neutral countries – a distinct contribution to the genre.

Recent years have seen more interest in telling the non-combatant stories of the second World War. Fictional representations have proliferated about the previously overlooked complexities of life for women left at home to farm the land, innocent foreign nationals interned, and children evacuated from the cities to the countryside.

Here Bolger relates the genuine hazards faced by sailors of neutral nations carrying essential cargos to civilian populations. These are not dangers often connected with the war. But sailing the open seas in small craft with green and gold letters bearing the name of the new Free State, avoiding aerial bombing, U-boats and harbour mines, demanded undeniable bravery.

As he has done in most of his other fiction, Bolger also constructs a tentative story of sexual awakening. In Wexford, Jack is tongue-tied in his attempts to woo his neighbour Ellie, and is similarly struck dumb when he first encounters the fearless refugee Katerina. More daunting than any challenge faced at sea is Jack summoning the courage to kiss a girl, and perhaps equally indicative of his journey from boy to man.

Even though the threat of danger is spelled out in the novel’s early stages, nothing quite prepares the reader for the events that occur during the Kerlogue’s homeward journey. Bolger’s rendering of the transformation of ordinary men, who have chosen a risky way of life, into truly heroic figures makes for engaging reading.

Christina Hunt Mahony is a senior research fellow in the School of English, Trinity College Dublin