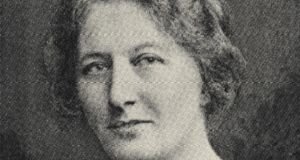 Ada English: served with Liam Mellows in 1916 and Cathal Brugha in the Irish Civil War, and spent almost four decades as a reforming psychiatrist at Ballinasloe hospital 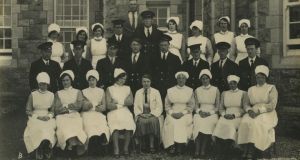 Staff at Ballinasloe District Asylum with Ada English at the front centre (circa 1917). Source: Mattie Ganly. Used with permission 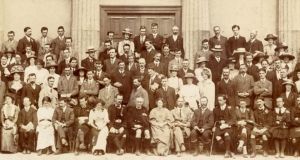 Ada English, attending a Gaelic League national convention in Galway, 1913, in the second row from the front, without a hat, beside Máire Ní Chinnéide (with hat) and behind Eoin McNeill (seated in the front row, holding a book). Douglas Hyde is seated to Eoin McNeill’s right. Source: Courtesy of the Curran family.

The history of Irish medicine does not lack for revolutionary women. In 1919 Dr Kathleen Lynn co-founded St Ultan’s Hospital for Infants in Dublin and became a Sinn Féin TD in the 1920s, while Dr Dorothy Price was a medical officer to a Cork brigade of the IRA and played a key role in the eradication of TB.

But what about psychiatry? The asylums cast a uniquely long shadow over 20th-century Ireland and, as a practising psychiatrist and historian, I’ve always wondered: where were the medical reformers seeking to revolutionise Irish mental health care? Who were the men and women, if any, who sought to build a better, fairer world for the mentally ill as the new Irish State emerged, with all its promise and possibility?

1 Coronavirus: Varadkar returns to practising medicine to help during crisis
2 Donald Trump’s clown car administration has put the fear in all of us
3 Restarting Ireland: When and how will we ‘get back to normal’?
4 Irish doctors on getting Covid-19: ‘In 90 minutes, I deteriorated quite rapidly’
5 Robbie Lawlor profile: A feared criminal with a long list of enemies
6 Dublin criminal Lawlor may have been shot dead by man who owed him money
7 Coronavirus: Plans to move 600 consultants into public system hit obstacle
8 Coronavirus: Boris Johnson in hospital for tests as symptoms persist
9 Una Mullally: Leo Varadkar’s mask drops again
10 Infected but feeling fine: the unwitting coronavirus spreaders
11 What is Houseparty, the app everyone’s talking about – and not in a good way?
12 Tuberculosis vaccine ‘potential game-changer’ in Covid-19 fight
13 Coronavirus: Co Tyrone couple buried together after dying 20 hours apart
14 Fewer deaths in Veneto offer clues for fight against coronavirus
15 How Covid-19 has changed the face of Irish shopping
16 Coronavirus: Number of Irish cases nears 5,000 as 21 further deaths confirmed
17 Coronavirus: Social distancing on the beach as people ‘get the message’
18 Coronavirus lockdown steps could remain into winter, says expert
19 Ireland has struggled to protect nursing homes from Covid-19
20 Five men charged after garda car attacked at Traveller halting site in Cork
21 Mary Lou McDonald: This crisis shows that Sinn Féin was right
22 Netflix has revealed its most-watched content. You might be surprised
23 Make a move to Irishtown – the affordable side of Dublin 4
24 Man City to investigate Kyle Walker over lockdown sex party
25 Man arrested after reportedly threatening staff in Dublin shop
26 Covid-19 testing: Irish pharma firms source raw material to make reagent
27 An ‘Asian flu’ pandemic closed 17 Dublin schools in 1957
28 Nurses warn significant numbers will not be able to work without childcare
29 Unions again urge change in wage subsidy scheme
30 An Post to begin free coronavirus ‘check-in’ on vulnerable persons
31 Coronavirus and children: The red flag symptoms to watch for
32 Queen Elizabeth invokes spirit of second World War in speech
33 Seán Moncrieff: I’m sick of hearing this is the new normal
34 Paul Flynn: how to cook the perfect potato rosti
35 The chickpea stew that broke the internet in the US is here. Give it a go
36 Dublin deserted: Coronavirus turns city into ghost town
37 David McWilliams: We must loosen up on financing pandemic spending now
38 Man shot dead in Belfast was suspect in Keane Mulready-Woods murder
39 Coronavirus: Analysis shows median age of confirmed cases is 48 years
40 Chris Johns: A shopping list for the post-Covid-19 world
Real news has value SUBSCRIBE