The Killing of Thomas Niedermayer: A quietly angry book 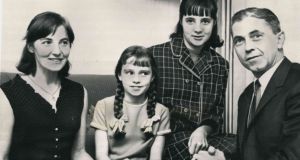 Thomas Niedermayer with his wife, Ingeborg Tranowski, and their two daughters. He was kidnapped in 1973 and his body was discovered five years later

In 1980 workmen from the West Belfast Environmental Action Group spent four weeks cleaning out an illegal dump in swampy parkland on the outskirts of Andersonstown. The cleared site eventually became the genesis of today’s Colin Glen Forest Reserve, a popular amenity in the hills of west Belfast.

There was no such thing as a West Belfast Environmental Action Group. The workmen were undercover RUC officers, searching for the body of Thomas Niedermayer (45), a West German factory manager and honorary consul who had been abducted six years before, with no admission of responsibility.

1 Three relatives dead after apparent murder-suicide in Kanturk, Co Cork
2 Don McLean: ‘My ex-wife is the worst person I ever knew’
3 How much state pension will I get next year?
4 Woman stranded in Ireland due to pandemic has ‘miracle baby’
5 Almost 20% of staff at Dublin hospital have antibody evidence of Covid-19 infection
6 Two hundred Irish retailers for all your online Christmas shopping
7 Seán O’Brien: Anger over my parents’ break-up never left me
8 Covid deniers: for the sake of the vulnerable, do what’s asked of you
9 Una Mullally: Alan Kelly is shrewdly hitching Labour’s wagon to Sinn Féin
10 US election: Trump says reporting on Covid is ‘fake news conspiracy’
11 Wet pubs and schools reopening led to rise in Covid cases, says Mayo GP
12 Matthew McConaughey: ‘I wouldn’t give back one ass-whupping for the values that are ingrained in me’
13 Martin Feeley: Hospital admissions don’t justify pressing the panic button
14 Saving Tim Robinson’s Roundstone home, his last gift to the Irish nation
15 John McManus: Is this the best little country in the world for lockdowns?
16 Covid-19: Further 939 cases and three deaths reported in State
17 Strengthen your muscles without leaving the house
18 ‘Difficult months ahead’: Europe prepares for more pain as Covid cases soar
19 Oxford Covid vaccine trials offer hope for elderly
20 Europe contemplates bleak winter as Covid-19 cases soar
21 Protest at Áras an Uachtaráin over mother and baby homes Bill
22 High-intensity workouts may be more enjoyable than less strenuous exercise
23 Breathe easy to maximise your running experience
24 Lockdown mid-term: what to do, watch and cook this week
25 Madness or defiance? The GAA is taking a huge gamble in staging Championships
26 Population growth projections for Tullamore queried
27 Appeal for missing woman: 'She is my only sister... it’s still torture'
28 The Irish teenager with more TikTok followers than Miley Cyrus and Ellen DeGeneres
29 Minister rejects application for NI’s largest wind farm
30 Life under Level 5: Where can I go, who can I see, what is closed and what is open?
31 Gardaí to investigate whistleblower claims at Limerick city and county council
32 When Anthony Clare met ‘calculating, disturbing’ Jimmy Savile
33 McAleese warns of potential Brexit toll on Belfast Agreement
34 Gibson-Park, Earls and Kelleher all in race to make Ireland’s French finale
35 From the past to modernity: images of Ireland transforming
36 Stevie Nicks: ‘If I had not had that abortion, there would have been no Fleetwood Mac’
37 Transmission of Covid-19 on flight into Ireland linked to 59 infections
38 Dan Martin keeping it day-to-day as Vuelta proves challenging for riders
39 The baby black market
40 Couple found guilty of murdering Irish dancer with ‘devil’s breath’ drug
Real news has value SUBSCRIBE