Book review: Rashid Khalidi emphasises the exercise of Israeli power, its toleration by the US, and the high level of Palestinian suffering 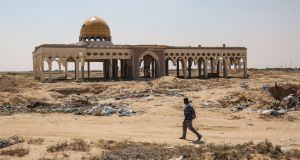 Of course, 100 years ago there was no such thing as an Israeli either. The “Israeli” and “Palestinian” nations have come into being simultaneously, and in conflict. The assertion of one is often formulated as the denial of the other.

1 Coronavirus tales confirm – and shatter – German stereotypes
2 Coronavirus in Ireland: New powers of arrest for gardaí expected to come into force
3 No April Fool jokes please, we are not in the mood
4 Coronavirus: Notion of a rapid economic recovery is at best wishful thinking
5 Coronavirus outbreaks in nursing homes, hospitals to be tackled in new plans
6 Róisín Ingle: Have you snapped yet? I did the other day. Five times
7 ‘My husband uses my past infidelity as a stick to beat me with’
8 Nice to see you: Which is the best video calling option around?
9 A letter to Ireland from Italy: this is what we know about your future
10 Woman in her 50s found dead in house near Killiney Golf Club
11 Miriam Lord: Vigilant Richard Boyd Barrett keeps the Hungary at bay
12 Irish and European shares slide on Trump comments and dividend suspensions
13 Covid-19: Critically ill Irish patients to take part in global clinical trial
14 Trinity College Dublin acquires IFSC block for €16m
15 Tempers fray as coronavirus lockdown fatigue hits Italy and Spain
16 Look on the bright side: International Space Station visible in Irish skies tonight
17 Texan spring break group tests positive for Covid-19 after Mexico trip
18 Labour TDs back going into opposition rather than into government
19 Frontline bank workers to get pay top-ups during Covid-19 crisis
20 I was on the Peru rescue flight. This is what happened
21 Michael McDowell: Covid-19 crisis raises important points on the limits of the EU
22 Coronavirus: Equipment shortfall brings test results down to 1,500 a day
23 Coronavirus: More than 650 beds secured for asylum seekers in direct provision
24 Meath couple’s company hit with €105m discount on purchase price
25 Australian rugby staring into abyss as another crisis hits
26 My favourite sporting moment: Game, set and couch as Borg takes down McEnroe
27 Equity markets ‘too volatile’ for bargain hunting, says Lego fund manager
28 Kathy Sheridan: I should be enjoying the Covid-19 lockdown but I cannot
29 Fierce backlash to Dutch hard line on eurobonds
30 PTSB mortgage holders in arrears face shorter Covid-19 payment breaks
31 From eating healthily to staying warm, how to treat Covid-19 in the home
32 US authorities scrutinise Zoom’s practices as app’s traffic surges
33 Leaving Cert: ‘It feels aimless. I don’t know what the story is’
34 Six Nations rugby needs to be protected for terrestrial TV
35 Coronavirus: Republic reports 17 further deaths, 325 new cases
36 Coronavirus: European solidarity sidelined as French interests take priority
37 Coronavirus: Ireland needs careful action to prevent a severe fall in living standards
38 Covid-19 crisis puts value of the modern-day office into focus
39 Coronavirus: Letters flow to self-isolating father whose children were found dead
40 Coronavirus: Catholic priests under pressure to perform funeral Masses despite Covid-19
Real news has value SUBSCRIBE