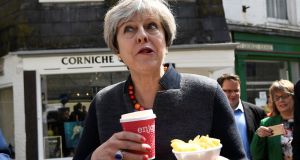 Then prime minister Theresa May having some chips in one of Cornwall’s chi-chi towns during the Brexit campaign. Photograph: Dylan Martinez/PA

Remember those halcyon days when Brexit was the subject of every headline? When we watched in disbelief as British MPs scurried around the voting chambers of Westminster and lounged despicably on the benches of parliament? Death and dying, there was none.

To read Amanda Craig’s new novel, The Golden Rule, is to cast your mind way back to a time when Brexit rocked the world. Set in the summer of 2018, this is Craig’s second Brexit novel, after 2017’s The Lie of the Land.

1 Keith Duggan: Bubba Wallace tweet shows just how troubled Donald Trump’s mind is
2 50 best Irish albums of all time – in order
3 Thandie Newton names names. Will Hollywood punish her?
4 Coronavirus: Two more deaths confirmed amid concern over new clusters
5 Cluster of Covid-19 infections at Kerry ‘house party’ investigated
6 Jack Charlton’s own grievances endeared him to Irish fans
7 ‘At night I would go to my room to quietly drink.’ Irish women and addiction
8 Brightest comet of the century visible in Irish skies for the next week
9 Jack Charlton: Tributes paid to ‘sporting icon’ and ‘father figure’
10 David McWilliams: The Pandession is destroying Ireland’s Craic Economy
11 ‘My rent here is so low it’s a joke’
12 Monster or machine? Everything we know about coronavirus after six months
13 Reopening of pubs that do not serve food may be delayed beyond July 20th
14 Belgium helps Ireland to a Brexit boon
15 Fintan O’Toole: In the US, the 19th century is coming to a very slow end
16 Jack Charlton obituary: One of Ireland’s greatest adopted sons
17 Jack Charlton’s tactics were divisive but he transformed Irish expectations
18 The Gael Becomes Irish: the prospects for the Irish language in Ireland today
19 No-fuss deconstructed cheesecake: a wonderful simple treat
20 John Bolton on Trump’s presidency: ‘Every day is a new adventure’
21 Dave Hannigan: Notre Dame’s Fighting Irish leprechaun needs its ass kicked
22 Bobby Storey: The IRA's planner and enforcer who stayed in the shadows
23 This jewel of a gravel garden needs weeding just once a year
24 Capturing Irish hearts and falling asleep in the Vatican: Jack Charlton in his own words
25 Johnny Depp: Ex-wife or friend defecated in bed in ‘fitting end’ to marriage, court hears
26 Hazel Chu: ‘The Green Party needs new leadership and a system overhaul’
27 Former school principal jailed for sexually abusing seven pupils
28 Goodbody’s planned €155m sale to Bank of China falls through
29 Delicious details of Mary Trump’s book open up world of president’s family
30 Two men charged in relation to Cork’s largest ever heroin seizure
31 The Happy Pear twins: ‘It’s the first book we’ve done without topless shots’
32 Paschal Donohoe’s victory seen as a revolt against EU’s ‘big four’
33 Many politicians remaining silent over online personal abuse
34 Patrick Freyne: A very likable baby with a beard – it’s Zac Efron! – explores the world
35 Mary Trump: The inside story of why she wrote a tell-all memoir
36 My marriage is boring and polite. How do I make my husband interested in me?
37 FF, FG should know Greens willing to walk away from government – Catherine Martin
38 Two injured after plane crash lands in Galway
39 Man (60s) killed as other driver ‘leaves scene’ of two-car crash
40 The sad, secret life of Whitney Houston
Real news has value SUBSCRIBE