The Glass Shore review: A further feast of female voices 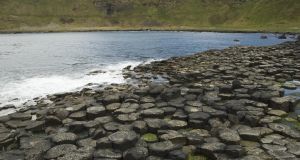 The Glass Shore: “If these 25 women have something that links them, it is a concern with identity and borders, both physical and imagined.”

Book Title:
The Glass Shore: Short Stories by Woman Writers from the North of Ireland

What makes a writer Irish? Or, for that matter, what distinguishes a writer from the Republic from one born and raised in the North, other than distance and a Border? And is there something specifically gendered about the outlook of, say, a writer who is a woman from Northern Ireland? I ask these questions because I’m not a great one for categorisation. The best writers defy it, and I happen to believe most authors are shaped by what they experience rather than the geography of their births.

So I picked up a copy of The Glass Shore: Short Stories by Women Writers from the North of Ireland with some trepidation. Part of it was shaded by the personal. I am a writer. The last time I checked, I was a woman. I also grew up just outside the village of Claudy in the northwest from the age of four. I went to school in Derry and then in Belfast.

However, my parents are English and I inherited their accent. Because of the way I speak, I am not seen as an Irish writer. Rather, I am simply someone with an unexpected connection to the country. Possibly it is because none of my novels are set in Ireland. Does that mean a writer is a certain thing only because of what they choose as their subject matter? I don’t think so.

This is not a complaint, just an observation. It meant I was interested, when I began reading The Glass Shore, to see whether there was a commonality of theme; whether it would all be digging for turf and men marching in balaclavas.

It wasn’t. In fact, the book (a follow-up to 2015’s award-winning The Long Gaze Back: An Anthology of Irish Women Writers) is one of the most multilayered and thought-provoking collections of stories I’ve read in a long while.

Its editor, Sinéad Gleeson, should be justifiably proud of her selection. Not one of the stories was what I anticipated, and almost all of them were shaded with an intelligent nuance that made me rethink my own assumptions.

For one, it made me realise how important it is to collate the work of female writers who have, in the past, been overlooked in favour of more prolific men. That might seem an obvious point to make, but female writers living outside major urban areas before the 21st century faced a double barrier to publication from both their sex and their location.

The Glass Shore tackles these twin injustices head-on and introduced me to authors I had never read before. Among them are Rosa Mulholland, a protegee of Dickens born in 1855, whose high-gothic tale The Mystery of Ora kicks off the collection. There is also Margaret Barrington, whose Village Without Men (1982), is a terrific meditation on obsession and jealousy.

Each story is introduced with a potted biography. I often felt the author’s life story was just as interesting as the work they produced. Barrington, for instance, was born in Donegal in 1896 and eloped with novelist Liam O’Flaherty after her first marriage broke down. She left O’Flaherty after a few years to move to London and “begin a career as an author and journalist”.

That’s a casual sentence suggestive of an enormously impressive and unconventional application of will. After the second World War, Barrington wrote her first novel “while helping refugees from Nazi Germany”, before moving to west Cork to live out her days in relative obscurity.

Secondly, although there are some recurring thematic concerns, they are not the well-worn cliches of the Troubles. Admittedly, there is a smattering of nuns and soldiers and men painting murals, but there are also Polish cleaners and feckless mothers having tea in Claridge’s – and, in Una Woods’s exceptional The Diary, a water tank and a defunct car engine are given their own voices.

If these 25 women have something that links them, it is a concern with identity and borders, both physical and imagined.

Jan Carson’s Settling is an astute evocation of a woman moving from Belfast to London to set up home with her partner, only to discover the apparition of her dead grandmother skulking in the wardrobe, demanding a cup of tea to be made in a pot.

The protagonist wants to be happy about the move and all its attendant opportunities, and yet she feels herself “split in two” with the appearance of her granny, who reminds her of all she has left behind.

“I can hear nothing but London louding outside the window,” Carson writes. “Everything is louder here. Everything is quick and straight and sure of its own skin.”

In Disturbing Words, Evelyn Conlon writes of a woman who has also left her family home on the Border in the North: “Yes, I had gone away. First to Dublin, where they couldn’t stop hearing the headlines in my accent, and then to further away, where it didn’t matter.”

By contrast, her parents stay behind and make a point of building a basement extension that deliberately crosses the contested Border between North and South – an act the protagonist compares to a neighbour who builds underground car parks for mosques in Abu Dhabi.

There is a recurrence of that idea, of crossing over – from Belfast to London, from North to South, from Dublin to Abu Dhabi, from the everyday fact of separation and dispute to the liminal imagined space of unity and togetherness.

One of the most affecting pieces in the collection is Lucy Caldwell’s Mayday, which opens with a young Irish woman taking pills to trigger a miscarriage. She is a student in England and knows that these same actions would be illegal across the Irish Sea. She remembers, as a young girl, taking the Holy Communion wafer even though she wasn’t Catholic and “afterwards, they tell her she’s going to Hell”.

Again, there is that sense of entrenched difference you can’t help but feel if you grow up in a place defined by it.It’s a beautiful comparison: one pill designed to end life; the other to resurrect. It reminds us what a mutable thing identity can be.

So much depends on where you are born and in what culture you are raised, and so much of our character is formed by the invisible divisions between us: walls and borders and the concrete of history poured into the gaps.

The writers in The Glass Shore are not solely defined by either their personal geography or their gender, but their work asks profound questions about who we really are. Short stories, then, but big ideas.