The Five: The lives of the women society left to hands of Jack the Ripper

Review: Hallie Rubenhold does not idealise but exposes the hypocrisy at heart of story 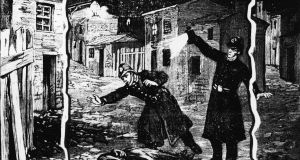 Of the canonical five, the confirmed victims of Jack the Ripper, it may be Elizabeth Stride who was the least likely. But her trajectory differs little from the others.

A fresh-faced Swedish country girl gone to Gothenburg at 15 as a domestic servant, expelled from her work because she was pregnant, a descent through the institutions devoted to the fallen, the loss of her baby, the last option being the “street of many nymphs” , then traded to England carrying the syphilis that would ruin her mind in the dark streets of Spitalfields.

1 Ireland has strategy to ‘break the chains’ of coronavirus - WHO’s Mike Ryan
2 Cheltenham faces criticism after racegoers suffer Covid-19 symptoms
3 UK makes another coronavirus U-turn but doubts over strategy linger
4 No signs of lock-down fatigue in Ireland ... yet
5 Are holidays booked for July and August going to happen?
6 Irish hospital system ‘far from being overwhelmed’ by Covid-19
7 Stephen Collins: Second general election now a real possibility
8 Covid-19: Westport braces for tough times ahead
9 ‘For the first time in years it is a renter’s market’
10 Coronavirus: Intensive care units ‘may be overrun’
11 Miriam Lord: You cannot cocoon democracy – or can you?
12 Think you’re bad at video-conferencing? Boris Johnson is worse
13 Central Bank warns of €22bn hole in public finances from coronavirus crisis
14 What is Houseparty, the app everyone’s talking about – and not in a good way?
15 Expect lockdown restrictions until September, says Dalata hotels chief
16 Coronavirus: Almost 100 staff and residents in one nursing home test positive, Dáil hears
17 Tiger King: Before long I was calling myself Pat Exotic, Cat King of Marino
18 Coronavirus: European solidarity sidelined as French interests take priority
19 Some protection equipment from China ‘not ideal’, HSE says
20 Impact of Covid-19 on Travelling people: ‘Worst that ever came’
21 Irish family pay tribute to UK medic who died from Covid-19
22 State should give us all the gift of Paschalbonds
23 International Booker Prize 2020 shortlist announced
24 Klaus Regling: Eurobonds are not the solution to the cost of coronavirus
25 Cork men quarantined in Vietnam after St Patrick’s Day party
26 An Post sees big jump in people opening new current accounts
27 Coronavirus: Concerns raised over private practice in public hospitals
28 Varadkar: Decision next week on relaxing coronavirus restrictions
29 A letter to Ireland from Italy: this is what we know about your future
30 Economy could have relatively rapid recovery from Covid-19
31 ‘Everyone still thinks it’s a joke’ - parents of toddler with coronavirus speak out
32 Coronavirus: South Africa ramps up testing in townships
33 Netflix has revealed its most-watched content. You might be surprised
34 Covid-19 jargon buster: What are ‘the curve’, R0 and the NPHET?
35 ‘It’s Sinn Féin against the rest’: NI Executive in conflict over coronavirus
36 Unprecedented hit to Irish economy as unemployment claimants exceed 500,000
37 How fitness gurus stay healthy at home
38 Andrew Conway diary: In search of a competitive edge
39 Coronavirus: Should everybody be wearing masks to combat Covid-19?
40 Protective clothing should be worn while preparing Covid-19 victims’ remains – HSE
Real news has value SUBSCRIBE