Book review: Kathryn Scanlan’s collection of stories runs close to the bone but there’s humour too 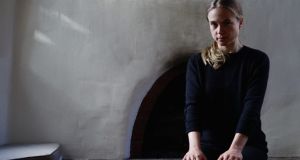 Kathryn Scanlan claims that she either writes from the point of view of an alien or as though addressing one.

A woman cuts her hand while chopping onions. Chilled to the marrow, she passes out, having caught a glimpse of bone: “I saw it, white, swimming in the brimming gash.” This gory incident, which occurs in the collection’s concluding tale, recalls an earlier piece, where an obsessive hunter polishes animal bones “into gleaming white abstractions”. Lean and mean – whittled down to their very viscera – the 40 stories assembled in The Dominant Animal are certainly close to the bone.

As in her novel Aug 9 - Fog (2019) – carved out of a found text – Kathryn Scanlan seems to proceed not by addition but subtraction, like a sculptor chipping away at a slab of marble. “Ta-da!” (as its title advertises) turns this process into something of a joke. It closes – just as dusk darkens the neighbourhood “from the ground up, like dye climbing a cloth” – with an Old Testament-style bush giving birth to a figure. An arm, leg, and foot gradually emerge, while the female narrator looks on, entranced. “I’ve always been a sucker for origin stories,” she comments, “so I held my breath and waited to see how this one might begin.” Ending with a beginning (this is the last sentence) is a way of neither beginning nor ending, just like newborns in these pages never seem fully alive while the recently deceased never seem quite dead. It is a ruse to tap into the primal darkness while holding it at bay. The book itself ends on a similar, albeit more sinister, note: a shadow springing forth from a dark corner in the protagonist’s backyard, “like a vision of God, gnashing his great white teeth”.

1 All students will not return to school even if social distancing rules are relaxed - McHugh
2 Trump says, ‘I have the best words.’ Now this comedian’s going viral for lip-syncing them
3 We need to pay very close attention to what is happening in Britain now
4 What do you do when you meet a bear on a walk? Copy this 12-year-old
5 Emily Maitlis thanks BBC viewers for support after Cummings row
6 ‘Stick to the guidelines’ - People warned not to gather in crowds as sunny weekend approaches
7 Miriam Lord: Taoiseach is trapped in a Zoom session from hell
8 The human cost of Covid-19: new figures reveal the toll on Ireland's care homes
9 Donald Trump has one last chance to ensure his re-election
10 New rules for arrivals to Ireland start today - what is changing?
11 Four things that could help Ireland escape from the Covid-19 recession
12 Dave Hannigan: Trump gets the clubs back out as death toll keeps rising
13 Bake-off: Matt Damon bids farewell to bakery as he prepares to leave Ireland
14 What exactly will happen in phase two of easing restrictions?
15 Brazilian gang held in Offaly had sub-machine gun and student visas
16 Treatment ordered for man who could die due to neglect of personal hygiene
17 Church closes its doors after flouting public health rules
18 Ross O’Carroll Kelly column 'not racist towards English people'
19 Kinahan cartel ‘foot soldier’ jailed over failed plot to murder Patsy Hutch
20 Temperatures could reach 28 degrees today ahead of sunny bank holiday weekend
21 ‘Ireland should take calculated risk’ in greater easing of Covid-19 restrictions
22 Brown Thomas and Arnotts shoppers will be able to book time slots for entry
23 Call for certainty on Covid-19 payment as Doherty seeks extra €6.8bn
24 ‘Since coming out of lockdown I’ve been a mess, and I miss my children’
25 Irish banks’ failure to innovate could leave them written off for good
26 ‘It would be such a shame if Ireland were to lose its beautiful native tongue’
27 Why is a German court undermining the European Union?
28 EU needs to rebuild GDPR after only two years
29 Tempted by a weeknight barbecue? Here’s how the pros turbocharge their grilling
30 Tax and the Pandemic Unemployment Payment: Your questions answered
31 Britt Ekland: 'The Bond girl of my era exists no more'
32 Coronavirus: ESRI warns of deepest recession in Irish history
33 Trump to sign executive order on social media, White House says
34 World Rugby approve law trials to reduce player contact
35 Live beside the Edge in docklands penthouse for €1.7m
36 Leaving Cert: Teachers advised to ‘destroy’ documents relating to students’ grades
37 Two-metre rule, summer camps and golf considered by Ministers
38 Trump threatens to close down social media companies after Twitter fact-check
39 Dr Bob Rotella: ‘If you focus only on the target you’ll play darn good golf’
40 This is focaccia, but not just any focaccia
Real news has value SUBSCRIBE