The Ditch: A meandering trip through an ageing mind 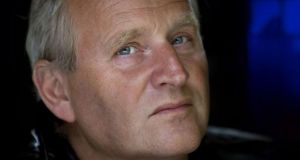 Published to mixed reviews in the US last year, the Dutch author Herman Koch’s latest novel, The Ditch, is best enjoyed as a meandering trip through the mind of an ageing, troubled man trying to figure out where he stands in his career, marriage and life. Written with Koch’s characteristic humour and sharp eye, the novel is narrated by Robert Walter, the celebrity – at least in his own head – mayor of Amsterdam. After watching his wife, Sylvia, have a cursory conversation with an alderman at a public event, Robert becomes convinced of an affair. His descent into paranoia makes for an entertaining if sometimes long-winded read.

Uncertainty is the cornerstone of the novel – is Sylvia cheating or is Robert imagining an affair? – and Koch brings it into his narrative in many inventive ways. There is a dizzying number of subplots: Robert’s parents, in their 90s, have decided to kill themselves while they’re still of sound mind and body; his best friend, Bernhard, is a genius with complicated ideas about the finite nature of the universe; his daughter, Diana, loses her cat; and a journalist unearths a photo of Robert as a young man beating up a police officer during protests against the Vietnam war.

1 Children found dead in their Dublin home were murdered
2 Young homeless mother may have been dead in tent for a number of days
3 The real Contagion virus is out there and it’s causing virologists to worry
4 Six within 60: homes to buy within an hour of the M50
5 Aldi, Lidl bow to pressure to ban non-essential ‘middle aisle’ sales
6 Cork shootings: Gardaí believe older son was shot multiple times
7 America at Large: Golfers guilty of legitimising Trump’s toxic regime
8 Europe enforces restrictions to avoid ‘millions’ of deaths
9 School closures on the agenda following ASTI vote
10 Newton Emerson: Money talks and waffle walks in Shared Island initiative
11 In rural America, support for Trump is complicated by pandemic
12 Bodies of mother and two children removed from south Dublin house
13 Calm down covidiots, it’s nothing personal
14 Grafton Street landlord cuts high street property values by 26%
15 No grand conspiracy to protect those responsible for mother and baby homes
16 Can Big Tech’s backing install Biden in the White House?
17 Shocked locals hold vigil for mother and children found dead in Ballinteer
18 Solskjær’s stock is on the rise again after clever squad rotation
19 Lockdown midterm guide: four tips for a happy Thursday
20 Michael Harding: Three reasons you’ll never see a cat in Donegal
21 Ireland, France or England? Who needs what to win the 2020 Six Nations
22 Finn McRedmond: Why did the Tories get it so wrong over feeding children?
23 Five lessons of Stoicism: What I learned from living for a week as a Stoic
24 Revenue accused of harassing businesses over Covid wage subsidy scheme
25 Medical gaslighting: The women not listened to or viewed as overdramatising or catastrophising
26 Two hundred Irish retailers for all your online Christmas shopping
27 Dublin City Council seeks to use Docklands tower block for social housing
28 Cork shootings: Gardaí find lengthy apparent suicide note on one of the dead men
29 Sonia O’Sullivan: Nothing normal about days spent under strict hotel quarantine
30 Mother and Baby Home survivors can seek access to personal records
31 Suzanne Lynch’s US Election Diary: Biden focuses on soaring Covid rates
32 Nphet ‘not anticipating’ advising against schools reopening after midterm
33 Man jailed for five years for killing 7ft 5in Belarusian man
34 How long can Government afford to keep State pension age at 66?
35 Johnny Ronan loses out on €315m Dublin docklands deal
36 ‘I don’t want to be in Mountjoy Prison, nobody does’
37 ‘We must avoid a tragedy’: European Council head on Covid-19 mistakes
38 Covid-19 is not a matter of opinion or politics
39 Coronavirus: Six deaths and 675 further cases reported in Republic
40 Flood risk in Connacht and Munster as wind warning issued for Galway, Mayo
Real news has value SUBSCRIBE