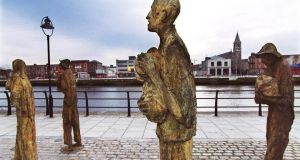 A difficulty in representing those who perished or left during the Famine is that “the poor leave little behind”. Photograph: Frank Miller

In January 2015, some 20,000 outraged signatories endorsed a petition against a sitcom announced by Channel 4 that would be set during the Great Famine. Many found the notion that modern Ireland’s greatest tragedy would provide fodder for comedy hard to stomach, and Channel 4 quietly shelved the project. Yet three years later the film Black ‘47, which uses the Famine as background for a gory tale of revenge, was received enthusiastically.

Why the one but not the other? What are the ethics of representing troubled histories, particularly if your purpose is to monetise them? Gillian O’Brien’s The Darkness Echoing explores this question by investigating the phenomenon of dark tourism, “travel to places associated with suffering or death”.

8 Wood burning stoves: The inconvenient truth about the homely heater

14 Six Nations: Time for Ireland to deliver in style against Italy

16 Michael Walker: Why Marcelo Bielsa is manager of the season so far

18 Kate Winslet: ‘I shouldn’t have worked with Woody. I’ll always grapple with that regret’

21 LeBron James tells Zlatan Ibrahimovic: ‘I will never shut up’

24 Matt Williams: Offloading skill has been obliterated from this Ireland attack

25 Social Democrats to explore options for growth in Northern Ireland

26 Jennifer O’Connell: The Government doesn’t trust us and it’s mutual

27 Paul Flynn: Three satisfyingly simple dishes that anyone can cook

28 ‘We can’t just dump our rubbish in the gorden. It’s the Vico Road – there’ll be meetings’

31 Covid-19: Self-isolation rules to be eased for healthcare workers