The Catholic Church and the Northern Ireland Troubles: A seminal book

Book review: Margaret Scull looks at the church’s role in the Troubles over 30 years 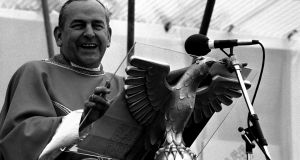 A viciously brilliant lampoon by the infamous Cummings from The Sunday Express of May 31st, 1981, which adorns the cover of this riveting and seminal book by a new young academic talent, says more about the Anglo-Saxon contempt for the Celts than the billions of words written about “The Troubles” over the past 50 years. Indeed, so devastating is this Cummings caricature of Cardinal Tomás Ó Fiaich, the prelate from south Armagh’s Cullyhanna who was demonised in the British media as the recruiting officer of the Provisional IRA, that there is a danger of national stereotypes being perpetuated for a new Brexit generation.

That the author, Margaret Scull, a Bostonian now at NUI Galway, sides sympathetically with the beleaguered Christian Soldiers on both sides of the Irish Sea against the crude sectarianism fomented so unscrupulously for decades of death and destruction by the Rev Ian Paisley, should immunise readers from returning to traditional trenches.

11 Fintan O’Toole: All the main actors in the Troubles tell partial, distorted and deceitful story

12 Coronavirus: 13 further deaths and 456 new cases reported in the State

13 Brexit: EU and UK negotiators to resume talks in ‘last throw of the dice’

14 Val McDermid: ‘There will be a united Ireland within five years’

15 The word of the year is defined as ‘watching Normal People in your pyjamas’. What is it?

16 The history wars: A new battleground in Irish politics

18 Viggo Mortensen: It ‘felt awkward’ replacing Stuart Townsend in Lord of the Rings

19 Is Ireland ready for the Covid-19 vaccine?

21 ‘I’m gonna have to get rid of the lockdown belly, it’s gonna be extra big this year’

30 Doctors ‘shooting themselves in foot’ by campaigning against FG, Varadkar texted Ó Tuathail

31 Jennifer O’Connell: Is it time woke culture was cancelled?

36 Ross O’Carroll-Kelly: ‘One of your Three Wise Men stuck his middle finger up at me’

39 Covid-19: Is Christmas really the problem?