The Birthday Buyer by Adolfo García Ortega review: a Spanish take on the Holocaust

Shaken to the core by the memoirs of Primo Levi, a father of two obsesses over the Levis’ tiny Auschwitz prisoner in this urgent, defiant novel 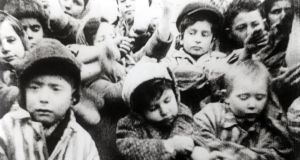 The Birthday Buyer is no ordinary novel. In fact, it is shocking and relentless, theatrical and astute. Once you begin reading it, you are caught in a story which is desperately familiar but no less disturbing. It is also unbelievable but horribly true.The narrator has decided that it is time for him to visit Auschwitz. He has read the works of the Italian Holocaust survivor Primo Levi, and many things have struck him. One thing in particular has taken possession of his imagination: the plight of Hurbinek, a little boy who lives on through a two-page reference in an early Levi work, The Truce (1963).

Levi had known the little boy who was born in Auschwitz and abandoned by his mother, who hoped he would be saved. Instead, Hurbinek was subjected to horrific medical experiments and left to die, which he eventually did at three years of age.Here, the narrator, a Spaniard with two little daughters of his own, sets out to give the little a boy a life, or rather lives, variations of an existence that barely began before it ended. The Birthday Buyer is populated by ghosts.

Very soon it is obvious that the narrator is an obsessive character with an emphatic, repetitive literary delivery that could be irritating but is very effective and well-translated by Peter Bush, who did a fine translation of Adolfo García Ortega’s equally daring if very different earlier novel, Desolation Island (2006; translated 2011).

“If Hurbinek, for example, had survived, he would be fifty-nine. He really wouldn’t be that old, and he might have a good memory, a cruelly good memory that would prompt those horrific nightmares so often experienced by people who passed through the camps when they are devoured by hunger, by hunger and yet more hunger.”

The narrator is not a Holocaust tourist; he has a commitment to this one child that never got a chance to live, as both of his young parents, Polish Jews, do in the camp. The narrator needs to get there. He wants the boy to have an invented life: “I want Hurbinek to exist.”

All very intense; this is a narrator to be handled with care. How much is fact? How much is fiction? What are his sources, aside from Levi’s writings? None of it is made clear. That is because the narrator is in a hurry to get to Auschwitz. But then a truck crashes into him on the Autobahn near Frankfurt and he now lies injured in a hospital bed, not at all happy about being in Germany.

His anxiety is evident. Wary of the young German doctors, he feels alone in the ward. There are five other patients referred to by him as “roommates”, and all of them are German. The narrator, fussy and whinging, misses nothing. He says they “seem middle or working-class”, adding: “It’s no private hospital. That’s clear from the meals they bring up and the spare selection of objects in the ward, some of which are broken or shabby.”

His little digression includes his general dislike of hospitals and the phobia he suffers, which is induced by panic “sparked off by that sweeping sterility where one feels one is lost and drifting, in an echoing void, a place of childish imaginary torture, where metallic sounds unexpectedly reverberate, with that colour white that permeates everything, walls, uniforms, bandages, a white where the red blood can suddenly appear even more violently because it is expected, cold, deliberate.”

It is a bizarre aside, and daring. Ortega is taking a risk by presenting the narrator as a crackpot, considering the seriousness of the material he has already introduced. But the genius of this eccentric, desperately sad and staccato narrative rests in Ortega attempting to show how the mind moves in great thrusts of random thought. Sensations inevitably give way to information and the processing of it.

Through reading Levi, the narrator has reached this level of hyper-thinking. Then very cleverly, as he has already created the impression that he, the narrator, is unhinged, he goes on to quote a passage from Levi that describes a similar hospital situation – albeit a very different hospital, in the man camp at Auschwitz.

“All the same, my attention” writes Levi in The Truce, “and that of my neighbours in the nearby beds, rarely managed to escape from the obsessive presence and mortal power of affirmation, of the smallest and most harmless among us: of a child, of Hurbinek.”

A couple of page further on, Levi makes a further reference to the child: “Nothing remains of him: he bears witness through these words of mine.”

The narrator’s quest is to track a child that barely lived. Through this child and also through the works of Levi, he reimagines the lives of other people as well, including Henek, a Romanian factory worker, who at the time was only 15 but had killed “lots of men”. Henek had tended the little boy.

Ortega plays on the emotions, the curiosity and also the fact that he knows he has the reader caught; it is impossible to put this insistent book down. The reader never quite knows what strange connection, cross-reference or anecdote Ortega will summon next. The little boy who never lived comes to life and so does Levi, the survivor who suffered the horrors of hell long after he was liberated from Auschwitz.

“On April 11, 1987” declares the narrator, “Primo Levi went out into the street for the last time. He had gotten up before dawn; it was still nighttime. A nightmare had prevented him from sleeping. Just another one of his usual nightmares. It was then, still in bed, that he took his decision, in that same bedroom where he had slept as a child. He decided to take his own life . . . He was an old man, had experienced everything a human could live and felt unnecessary. He had experienced too much.”

Holocaust fiction continues to overwhelm us; the story is the most powerful and shaming in human history. Many of the most harrowing account are by those who suffered in the death camps and somehow survived. Levi by nature was physically frail and was an unlikely survivor.

It is true that very few Spanish writers have written about the subject. The Catalan Maria Angels Anglada (1930-1999) did approach the subject with The Auschwitz Violin, which was published in Catalan in 1994 and eventually translated into English (not Spanish) in 2010.

But this is very different; Ortega, very much under the guidance of Levi, through the tragedy of one lost child sets out to acknowledge the countless anonymous children who were murdered: “Children . . . leave barely a trace. They don’t write letters, leave written or oral accounts . . . aren’t remembered by their community because of any common gesture or action.”

Throughout the book there are numerous references to the brutal murder of children, mainly Jewish infants. Ortega’s narrator speaks as one possessed of an awareness of the evils committed.

Originally published in Spain, this English language-edition from the Madrid publishers Hispabooks is urgent and defiant. It is as if the narrator is so staggered by the weight of the reality that he not only wants us to know it, he wants us to share in his disbelief. Ortega wants us to think again, to be as shocked, to feel as disgusted and as sickened as he is.

German readers could be very distressed. It leaves one asking how on earth could this have happened; and with such evil glee. But it did. The Birthday Buyer is a rhetorical, very human book that could, that will, make you forget just about any fiction currently being written in English.